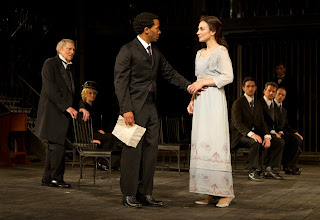 Along with “Measure for Measure,” the Public Theater is presenting a second Shakespeare “problem play” this summer, also, as it happens, involving a “bed trick.” wherein a woman takes her rightful place by the man she loves in the cover of night. The excellent Daniel Sullivan is at the helm this time, but the cast is mostly the same.

Sullivan’s production (airy design by Scott Pask) – prettily set in Edwardian times – delights the eye as befitting the fairy-tale quality of the story. Helena (Annie Parisse), a gentlewoman, loves the callow Bertram (Andre Holland), daughter of her protector, the regal Countess (Tonya Pinkins) who has maternally taken the orphaned young woman under wing.

Helena contrives to force Bertram into marriage after she saves the life of the King of France (John Cullum) using the methods she learned from her late physician father. The angry Bertram – who obviously fails to appreciate Helena's finer qualities -- dutifully weds her but quickly flees the court for the battlefields of Italy. While there, he attempts to seduce the beauteous Diana (Kristen Connolly). (And here’s where that bed trick comes in.)

His comrades-in-arms are the Dumaine brothers (Lorenzo Pisoni and Michael Hayden), and the foppish Parolles (Reg Rogers) who reveals his cowardice and disloyalty when the men trick him into thinking he's been captured by the enemy.

Tom Kitt’s music is particularly lovely and adds to the physical charms of this production, which include a couple of dance sequences and picturesque battle scenes.

I didn’t much care of Parisse’s far too contemporary-sounding Helena. Her line-readings lack poetry, and the ho-hum Holland is missing the requisite charisma to counterbalance the unpleasantness of his caddish role, making Helena’s attraction to him all the more puzzling.

After her bawdy part in “Measure,” it’s good to see Pinkins demonstrating her versatility as the noble Countess. She handles the text well, even if her generalized regality falls short of Margaret Tyzack, Celia Johnson and other great ladies who have assumed the role.

Cullum, as distinguished a veteran of classic theater as he is of musicals, is especially fine, and has a much juicier role on this occasion. He's proof that American actors can sometimes measure up to the Brits when it comes to playing the Bard. Dakin Matthews as Lafew has much the same quality. And as in “Measure,” Rogers is a standout as a roguish character who gets a well-deserved comeuppance.

Sullivan has decked out the text with many ingenious touches such as having Helena and Bertram’s parting kiss (before the latter’s flight) suggest that a union with Helena might not perhaps be so odious after all.

Still, this is the sort of production that might send an audience out thinking it’s the best that can be done with a play not out of the Bard’s top drawer. But those who remember the Royal Shakespeare Company fabulous 1983 mounting at the Martin Beck with Tyzack know how much more can be mined from the tricky text.

The same might also be said for the splendid BBC production which aired on PBS’s Shakespeare series many years ago. It's worth tracking down for those seeking a more authentic performance.

(Shakespeare in the Park, Delacorte Theater in Central Park, www.shakespeareinthepark.org or 212-539-8750; through July 30)