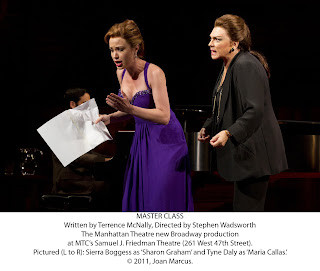 Against all odds, Tyne Daly – an unlikely casting choice for Maria Callas, to be sure – is absolutely magnificent portraying the diva in her post-career teaching period at Juilliard.

Though Daly has said in interviews that she’s eschewing impersonation – a claim often made by actors when their assumption of a real-life character falls short – she, in fact, captures Callas’ speaking voice perfectly: that odd mixture of European affectation, and more common, even strident, New York intonation. She is spot-on in every respect, a charismatic and imposing presence.

Playwright Terrence McNally has distilled the essence of Callas’ Juilliard transcripts and combined them with biographical elements, with a healthy dose of dramatic license, to create a vivid portrait of the artist in her sunset days: by turns, modest and imperious, sincerely helping the students while using the occasion to reminisce on her own career, deadly serious one moment and wryly humorous the next.

Beautifully paced by director Stephen Wadsworth, the “master class” setting disappears for two bravura set pieces: a thrilling recollection of Callas’ brilliant assumption of Amina in “La Somnambula” at La Scala, and an imagined scene between Callas and lover Aristotle Onassis, with Daly alternating between the two voices. Daly is simply riveting in both sequences, and indeed throughout the evening.

As for her pupils, Alexandra Silber is the guileless, nervously giggling student who bears the brunt of Callas’ perfectionism in the first act. Garrett Sorenson varies the pace in the second as the tenor who ultimately wins Callas’ approval despite being one of the despised breed of tenors, and Sierra Boggess, Broadway’s Little Mermaid, fresh from creating the role of Christine in Andrew Lloyd Webber’s “Phantom of the Opera” sequel “Love Never Dies,” assumes the Audra McDonald role of the overly confident student who has the temerity to sing Lady Macbeth’s aria for Callas, and crumbles and then rebounds under Callas’ penetrating critique. All are excellent, as is Jeremy Cohen who plays Manny, the accompanist.