Measure for Measure (The Public Theater - Shakespeare in the Park) 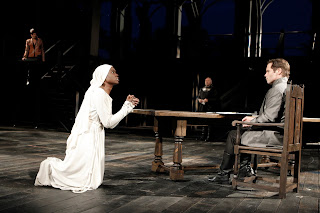 The New York Shakespeare Festival has mounted a solid “Measure for Measure” as a companion piece to “All’s Well That Ends Well,” both “problem” plays because of their varying, hard-to-classify tone but, if done well, as good as anything the Bard ever penned.

David Esbjornson’s mostly traditional staging is a big plus here, as is the generally fine cast, with not too many of those flat American cadences that always used to mar Public Theater founder Joseph Papp’s park productions.

Danai Gurira as the novice Isabella -- who must plead for clemency for her brother Claudio (Andre Holland), is condemned to death for having impregnated his finacee (Kristen Connolly) -- delivers her lines with exceptional clarity and admirable conviction. I felt, though, that at moments of stress, her interpretation bordered on the overwrought, as in her repeated demands for “Justice.”

Lorenzo Pisoni is a good Vincenzio, the Duke of Vienna, who pretends to leave town but, in fact, goes undercover as a friar, when the immorality in the city hits an all-time high. (Esbjornson visualizes this with creepy devilish characters that appear at key moments.)

The Duke leaves in charge his austere, morally righteous deputy Angelo (Michael Hayden) who ferociously clamps down on licentiousness. Of course, like any number of politicians recently in the news, the latter’s rectitude proves a sham.

Pisoni’s demeanor is rather too comical in his priestly disguise, rather than sardonically humorous, but he’s authoritatively impressive in the climactic moments when he takes charge of the city once again. Hayden, for his part, isn’t anywhere near as fascinating a villain as he should be, though he speaks the text well, but in the final scenes when his duplicity is unmasked registered little anxiety.

John Cullum as Angelo’s aide Escalus and Dakin Matthews as the Provost give rock solid performances in the traditional vein. Tonya Pinkins makes a lively Mistress Overdone, entertainingly indignant that her house of ill repute is being shut down, and Carson Elrod has some amusing moments as the pimp Pompey.

Reg Rogers has a field day n the comic part of the braggart Lucio who claims false intimacy with the Duke, and bad mouths the friar, little realizing whom he’s defaming.

The long climactic scene when everything is revealed, and set right is as riveting as any production of “Measure for Measure.”