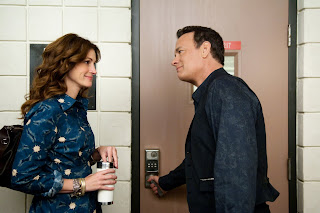 This is a pleasant if unremarkable vehicle – one that might have been cranked out in the old Hollywood days -- for the onscreen reunion of Tom Hanks and Julia Roberts. (They previously appeared together in “Charlie Wilson’s War.”)

On this occasion, he plays the titular character, an unemployed Umart (read Walmart) worker who has been laid off ostensibly for lack of education despite years of loyal service. The putative rationale given by his smarmy superiors is that, without a degree, he won’t ever be eligible for advancement.

It’s this last point that gives Mercedes the moral pass to fall for Larry (as you know she will eventually do). At one point, the husband admits, yes he likes “big boobs,” and seconds later, when he flings the word “washboard” at her, well, you just know, the marriage is really kaput.

Hanks, who can’t afford the price of gas for his car any longer, buys a motorcycle from his neighbor (Cedric the Entertainer) who runs a perennial yard sale, and promptly falls in with funky, charming fellow-student Tania (Gugu Mbatha-Raw) and her do-gooder motorcycle crowd. They all take a shine to the middle-aged Larry, and proceed to make him over. Roberts presumes an affair between the mature Hanks and the young Tania, and this misunderstanding keeps them at loggerheads for most of the movie, until the inevitable moment when she learns the truth.

Hanks and Roberts are pros, and carry their years remarkably well. Roberts, in particular, might have made “Pretty Woman” just yesterday. Hanks continues to embody the American Everyman with natural aplomb, and she’s a particularly deft comedienne, especially in a very funny drunk scene when she comes on to Larry, throwing all inhibition to the wind. (In a way, her performance reminded me of Lucille Ball’s very funny dinner table drunk scene in “Yours, Mine & Ours,” when tears of embarrassment give way to spontaneous, lusty laughter.)

Mbatha-Raw is an ingratiating presence and Wilmer Valderrama as her biker boyfriend evinces charisma.

Whatever the film’s good points or shortcomings, the buck stops with Hanks as, besides costarring, he’s produced, written (with Nia Vardalos), and directed the whole shebang. And yet, for all of that, it doesn’t register as a vanity piece, no small accomplishment.

So if “Larry Crowne” is totally synthetic and not for one teensy second believable (not even in its depiction of these recessionary times), there’s more than a little pleasure in watching these very likeable stars in action.

(The film is rated PG-13 by the MPAA for brief strong language and some sexual content) Print this post
Posted by Harry Forbes at 6:35 PM