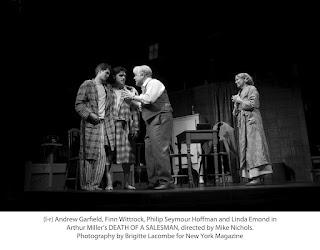 This production of Arthur Miller’s masterwork is as fine as the credentials of the creative team – director Mike Nichols, stars Philip Seymour Hoffman, Linda Emond, and Andrew Garfield, costume designer Ann Roth, and scenic designer Jo Mielziner – would lead one to expect.

Jo Mielziner? Didn’t he pass on several decades ago? Well, yes. But one of the glories of this production is the recreation of his original set, one that came to mesh with Miller’s own vision of how he wanted the play staged, with the Loman house dominates every scene. And lighting designer Brian MacDevitt has recreated the original lighting scheme as well. On top of that, there’s Alex North’s great original score. Like those other elements, utterly essential to the authentic mood of the piece.

Hoffman defies all the skeptics who might have thought him too young. He is, in fact, several years older than the role’s originator, Lee J. Cobb, when the latter created the part in 1949, still in his 30s. But when Hoffman does hit 60 – Willy’s stated age -- he will undoubtedly be even better, as indeed was Lee J. Cobb himself when he brilliantly recreated the role for a CBS-TV presentation in the 1960’s.

And, speaking of age, how times have changed! The way people talk about 60 in “Salesman,” you would think it was tantamount to 90! But I digress.

Yes, one does approach this production carrying the knowledge of Hoffman’s relative youth but his complete assumption of the character, and the masterful way he’s pitched his voice, and adjusted his gait, helps one, to a large degree, suspend disbelief.

Garfield is rather more difficult to accept as Willy’s son Biff, former football star, and now, as age 34, a disillusioned shell of his former self. The tall and slender Garfield has the wrong build and reads younger than his actual 28 years. But, those caveats aside, his performance is terrific. His heartbreaking confrontation with Willy in the Boston hotel room, and his final reckoning with his father are shatteringly done.

Emond – always a standout – makes a very fine Linda. And Finn Wittrock’s Hap, Fran Kranz’s Bernard; Bill Camp’s Charley; John Glover’s Ben are all right on target. Molly Price is wonderfully cast as the woman with whom Willy has an affair has just the right fleshy, cover-of-a-pulp-novel look about her.

Nichols directs with a clarity and fluidity this is masterful, the shifts between the present and Willy’s memories seamlessly accomplished. And yet, for all of that, I wasn’t nearly as moved as I recall being by the end of the Brian Dennehy-Elizabeth Franz production of a decade earlier.

Likewise, when I pulled out the CBS version (available on DVD) with Cobb (whose Willy is beyond compare), his original co-star Mildred Dunnock, and a superb supporting cast including George Segal as Biff, James Farentino as Hap, and Gene Wilder as Bernard, intending to watch only a few minutes of it, I found it so mesmerizing, I couldn’t shut it off till the end. And sure enough, the tear ducts started to flow.

Odious comparisons aside, the Nichols production is plainly one of the towering events of the season, and a must-see by any standard.