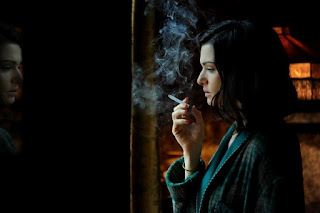 Terence Rattigan’s 1952 play about a woman who’s left her well-to-do husband for a test pilot who doesn’t love her with the same passion she feels for him has been transformed by director Terence Davies into a slow-moving if atmospheric and ultimately absorbing cinematic experience. (But be warned; the film takes a while to get you under its spell.)

For the most part faithful to the play in terms of plot and dialogue -- though minor characters have been removed and a couple added, and certain events now transpire out of sequence -- the narrative unfolds with a certain austerity, as Samuel Barber’s Violin Concerto surging on the soundtrack suggests a tumultuous undercurrent of emotions. There is, incidentally, one steamy, limbs intertwined sex scene such as Rattigan might never have been allowed back then for leads Rachel Weisz and Tom Hiddleston.

There are also a couple of instances of strong language which the playwright could not have used in 1952.

In any case, Weisz is quite superb as the unhappy married Hester who, as in the play, attempts suicide in the first scene all because, apparently, her lover Freddie has forgotten her birthday. In the original play, when the curtain rises, Hester’s already unconscious and must be revived by her landlady and a couple of neighbors.

Up-and-coming British actor Tim Hiddleston (F. Scott Fitzgerald in “Midnight in Paris”) is her ex-RAF test pilot lover, and Simon Russell Beale her less-than-passionate husband Bill, a prominent judge. (And it’s good to see one of the mainstays of the British stage in a substantial film role.)

Davies has rather extraneously added an overbearing mother in law (Barbara Jefford) to make sure we know how stifled Hester must feel in her married life, though that seems rather out of keeping with the text of the play wherein Hester indicates she was rather contented with her married life (apart from the aforementioned lack of passion) and, in fact, misses many of her friends. Some of the dialogue for the upstairs neighbor who helps revive Hester is now spoken by the new character of Freddie’s friend. The quasi-doctor who helps Hester is marginalized.

In the play, Rattigan describes Hester and Philip’s flat as dingy, and that aspect is accentuated by Davies here, who relishes the post-WWII early 1950s era, for which he sees the play as a metaphor.

The dialogue in the stage play offers interesting insights into the characters, so Davies’ grand cinematic flourishes only partly compensate for what’s been left out. In any case, with the long silences, pulsating Barber music, and Florian Hoffmeister’s soft-focus lensing, this “Deep Blue Sea” emerges as quite a different experience. There’s a virtue to such a thorough adaptation to another medium especially when some of the elements might otherwise seem dated, but at the same time, something’s been lost.

A BBC television version of the revelatory production from London’s Almeida Theatre was released late last year in a Terence Rattigan boxed set, and the comparisons are fascinating. The great Penelope Wilton is Hester (the part originated by Peggy Ashcroft), and she gives a multi-faceted performance if she’s rather ordinary looking (as was Ashcroft, for that matter) after the gorgeous Weisz not to mention (in the first film adaptation) Vivian Leigh. Ian Holm etches a far more positive character than Beale plays here. And a young Colin Firth makes a first-rate Freddie.

In both versions, the root of Hester’s discontent is rather difficult to swallow. Freddie seems to care for her – well enough – and even her husband is not such a bad chap either.

But, for all my quibbles, it’s good to see Rattigan – in his day, as much an in-demand screenwriter as a playwright – providing fodder once again for the big screen. And Weisz’s performance is outstanding, and worth catching for that reason alone.

(Rated R by the MPAA for a scene of sexuality and nudity.) Print this post
Posted by Harry Forbes at 2:49 PM