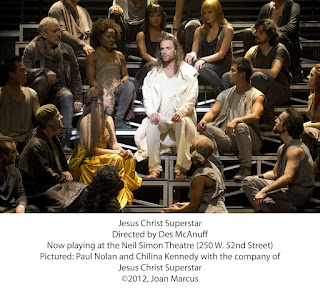 Andrew Lloyd Webber and Tim Rice’s once controversial rock musical has held up well, as productions over the years have amply demonstrated, and this new one – first produced under the aegis of the Stratford Shakespeare Festival – emphatically affirms. And what had once been assailed as sacrilegious now seems, for the most part, a perfectly reasonable retelling of Christ’s final days.

Though the divinity of Jesus is never specifically referenced or demonstrated, though not denied either (except by Judas who repeatedly accuses him of letting things “get out of hand “), the libretto covers the territory with admirable fidelity, and in some ways, as much grit (if not blood) as Mel Gibson's box-office busting "The Passion of the Christ." Certain scenes, such as Pilate’s interrogation of Christ, and the scourging, pack quite a dramatic punch.

The lion’s share of singing goes to Paul Nolan as Jesus and Josh Young as Judas, the latter serving as narrator, and laying the foundation for the Eva Peron-Che dynamic of Lloyd Webber and Rice's next work, “Evita,” a revival of which is coincidentally set to open shortly. Nolan looks the part and sings strongly, particularly in the “Gethsemene” scene, strikingly lit by Howell Binkley.

Chilina Kennedy makes a sympathetic Mary Magdalene, and does nicely with her lyrical numbers, “Everything’s Alright” and the show’s hit tune, “I Don’t Know How to Love Him.”

Tom Hewitt is particularly good as Pontius Pilate, strongly limning his inner conflict about condemning Jesus to death, while the crowd chants “Crucify Him” beyond the palace gate, another deft piece of McAnuff staging.

Lloyd Webber’s music – probably the rockiest of his career – is excitingly led by Music Director Rick Fox. King Herod’s honky-tonk song mocking Christ is done to a campy fare-thee-well but turns appropriately sinister and ugly at the end, lest anyone think they’re supposed to enjoy the number.

This fourth incarnation of the now-classic rock opera is the charm.