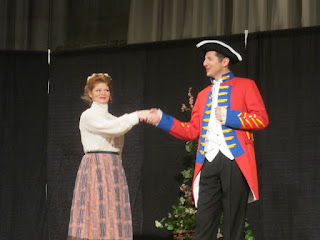 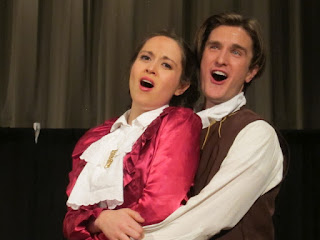 LOONY really and truly hit its stride on the St. Patrick’s Day weekend with a beautifully staged and sung adaptation of Victor Herbert’s impassioned paean to Irish independence, his 1917 operetta “Eileen.”

Director Alyce Mott’s deft re-jiggering – songs reassigned to different characters, a couple dropped altogether, some recitatives converted to dialogue, secondary roles excised, and the plot supplemented by the original inspiration for Henry Blossom’s libretto, a novel by Herbert’s grandfather called “Rory O’Moore” – was essentially the same as used for the Little Orchestra Society’s musically lovely, but dramatically stodgy, concert version under the baton of the late Dino Anagnost in 2003.

But, on this occasion, with a far more suitable cast and a playing area that allowed more imaginative blocking, everything clicked.

The time is 1796. Convent raised Eileen returns home to Sligo Bay from her formative years in France to the home of her Aunt Maude, an attractive widow. Barry O’Day, chip off the old block of a legendary freedom fighter father, comes back to lead his cronies in a fight for independence from the British and to reclaim his land, with the anticipated help of soon-to-arrive French forces.

Though he’s been flirtatious with the charming Maude, it’s Eileen he loves. Maude is sympathetic to the rebels’ cause, and keeps the English Colonel Lester at bay, allowing Barry to go undercover as her groom. A visiting English fuddy-duddy lord Reggie – who accompanied Eileen from France -- adds the comic touch.

This was the most consistently perfect cast of the LOONY productions thus far. Lady Maude – who, as narrator, has rather more to do than the titular heroine – was winningly acted and beautifully sung by Elizabeth Hillebrand, particularly in her rapturous “When Love Awakes.” Sheena Ramirez brought a pure soprano sound to Eileen from her opening “Reveries” through the big take-home tune, the achingly beautiful “Thine Alone” sung most feelingly with O'Day (Stephen Faulk).

Faulk had just the right Irish tenor sound, and the requisite operetta heroic quality usually lacking in LOONY’s male leads. In fact, the men here were a consistently strong group.

Kevin Grace brought virile tone and a lively presence to Barry’s comrade Sean Regan delivering a lusty “Fair Trade and a Misty Moon,” and his part of the rousing “The Irish Have a Great Day.” Tommy Labanaris made the most of his sweet solo, “She’s Sweet as Any Flower.” And David Kelleher-Flight did well in the semi-villainous role of the occupying British leader Colonel Lester. Reggie was stylishly enacted by David Seatter who delivered his “If Eve Had Left the Apple on the Bough” with music hall panache.

Michael Thomas conducted the six-piece orchestra with sensitivity and nuance, attributes thrillingly apparent from the very first notes of the overture. This was, I believe, the first time LOONY included a full overture. Thomas and his forces played a reduction of Herbert’s orchestration, and were right in keeping with the music, which was so dear to the composer, imbued as it is with patriotic fervor and heart-stopping passion.

But everyone seemed inspired by the piece to give their very best.

The set was simpler than some of the others – black masking, a couple of planters was all – but it didn’t matter. And Landmark on the Park’s church setting was ideal for the convent scene concocted by Mott for the opening scene.

The performance was miked, but there were some occasional audibility problems; a slight boost might have given more presence, particularly to the dialogue.

Mott’s direction had a fluidity and a clarity that made the whole enterprise seem far less clunky than it might have otherwise been, and Lisa Petri’s vigorous choreography added zip to the uptempo numbers. (Two step-dancing little girls -- Meghan Sheridan and Alicia Caracciolo -- provided charming accompaniment to the Entr'acte.) Everything aided and abetted Herbert’s score which generated several lumps in the throat throughout the evening.

As the fondly remembered New Amsterdam Theater Company performance at Town Hall in the 1980s – with its peerless cast of Judy Kaye, Jeanne Lehman, Mark Jacoby, and Cris Groenendaal -- triumphantly proved, the Henry Blossom original script (albeit abridged) can still work on its own terms. But there's no denying Mott’s version played especially well, and when the results are as felicitous as this, well, only a curmudgeon would complain.

The bar has been raised high for LOONY’s next production – Noel Coward’s “Bitter Sweet” -- coming up in May.