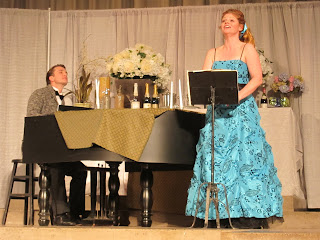 You have to hand it to LOONY for attempting so ambitious a show as Noel Coward’s operetta masterpiece with its demanding score, urbane dialogue, and lavish scenic demands.

For this over-the-decades narrative begins in the 1920s, flashes back to 1875, and then moves forward from there. At the start, aging heroine, Sarah (aka Lady Shayne) attends a party where she wryly observes the flippant “bright young things” who know nothing of real romance, and offers advice to Dolly, a young woman about to enter into a loveless marriage.

Sarah relates how, when she herself was young, she was in a parallel situation: engaged to the stuffy Hugh when she really loved her Austrian piano teacher and composer Carl. She defied convention, and eloped with him to Vienna where he was resident musician at Herr Schlick’s café, but their happy if impecunious idyll was cut short by a lustfully aggressive military officer whom Sarah (now called Sari) had rebuffed, and Carl was killed in a duel. Later, she married kindly Lord Shayne who gallantly understood he could never be the love of her life.

To a large extent, even without a full orchestra and hardly any production elements to speak of, LOONY pulled it off. Musically almost complete and, on the whole, well sung, the production gave as good an idea of the piece as Bard’s better bankrolled production last summer. Unaccountably, that production reset the contemporary scenes from the 1920s to the 1960s, and the flashbacks from the Victorian era to the 1930s.

Since LOONY substituted generalized formal attire for (more expensive) Victorian garb, this might as well have been the 1930s, too. But all in all, LOONY’s seemed truer to the spirit of the piece.

LOONY’s ever-reliable soprano Elizabeth Hillebrand played Sarah in all three eras, whereas Bard used veteran English actress Sian Phillips for the opening and closing scenes. I would have liked a grey wig for Hillebrand, though she acted the old woman well enough. On the other hand, she played her younger self too self-consciously girlish, even gawky, in the early scenes. She came off best as the widowed and remarried woman-of-means, circa 1895, resplendent and poised in a beautiful white gown, and singing her late husband’s “Zigeuner,” and her solo reprise of the show’s big tune, “I’ll “See You Again” gloriously.

Stephen Faulk’s sweet tenor was right for Carl’s music, but his acting seemed oddly tentative, and on top of that, he eschewed an Austrian accent, a curious choice since accents of all sorts abounded in the café scenes.

Caitlin Burke did particularly well with her French inflections as Manon, Schlick’s star entertainer and Carl’s former mistress. Her touching acting and accomplished rendition of Coward’s signature tune, “If Love Were All” were superb. She, like Hillebrand, elicited well-deserved bravas after each of her numbers.

Nathan Brian delivered the rousing “Tokay,” the score’s most bracing number, with gusto and firm tone.

Given the large number of roles, cast members got to play two, three, or four roles each. Most surprisingly, the villain Captain Lutte who kills Carl, returns moments later as kindly Lord Shayne, in the person of Brad Baron

At the first of two performances, James Biddlecome’s conducting was alternately graceful and droopy. And the six-piece orchestra was occasionally ragged. As noted, all the songs were used, except the “Eeny Meeny Miny Mo” part of the first act finale which includes an unfortunate, politically incorrect use of the “n” word. Still, another expression might have been substituted rather than losing the whole sequence. The concerted numbers for the ensemble were satisfyingly done.

Gary Slavin’s directing was on the presentational side, the actors often facing forward rather than each other, and a couple of the numbers like “What is Love?” were rather dully blocked, but space limitations clearly made a more expansive staging difficult. Still, the cabaret numbers, and the set pieces like “Green Carnations” and “Ladies of the Town” were staged with flair.

Alyce Mott was credited with “lightly” editing the piece, and indeed the text, on the whole, seemed satisfyingly complete, except for the brief final scene which should have brought us back to 1929 when Dolly resolves to marry for love, and the youthful party-goers continue their raucous revels as Sarah laughs ironically at the callousness of the current generation and offers a short reprise of “I’ll See You Again.”