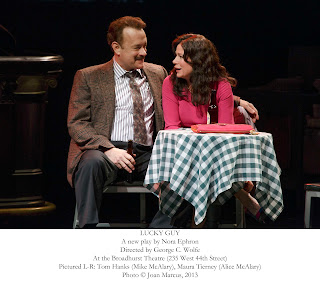 No, this is not the case of yet another Hollywood actor making a futile stab at Broadway stardom; Tom Hanks is the real deal. He confidently proves his stage mettle in his late pal Nora Ephron’s valentine to New York tabloid journalism in the person of columnist Mike McAlary. (Ephron, of course, penned the scripts for two of Hanks’ biggest hits, “Sleepless in Seattle” and “You’ve Got Mail.”)

“Lucky Guy” may not be one for the ages, nor of great general interest outside of this town, but the play holds your interest and is never less than enjoyable, affording Hanks and a host of veteran New York stage actors a solid showcase, while it’s not exactly “The Front Page” of this millennium.

Ephron charts McAlary’s progress in a succession of positions – Newsday, the New York Post, and the Daily News (with some back and forthing at the last two) – all the while supported by his loving wife Alice (Maura Tierney). Hubris eventually leads to a libel suit after he challenges the veracity of a woman’s charge of rape, based on erroneous information from his police informant.

And a serious car accident nearly ends career, not to mention his life. But he recovers, and sweet professional fulfillment comes in the form of a Pulitzer Prize for his reporting of the Abner Louima abuse story (the latter movingly portrayed by Stephen Tyrone Williams). The accolade, however, is bittersweet in light of the colon cancer which would soon kill him.

Though this is an ensemble piece, Hanks gives a bravura performance, delivering his final speeches with great dexterity.

With the ice broken, we can only hope that Hanks come back again and again to tread the boards between films.