A Gentleman’s Guide to Love and Murder (Walter Kerr) 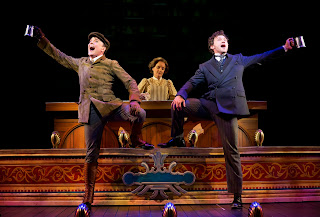 Astute musical buffs may be forgiven if they think they’ve time traveled into some West End musical of the late 1950s or 1960s on London’s Shaftsbury Avenue, for this stylish and delightful musical version of the Roy Horniman novel that inspired the Alec Guinness classic, “Kind Hearts and Coronets,” is a real throwback in the best sense of the word.

You might also be reminded of those 1960s Off-Broadway English pastiche musicals such as “Ernest in Love” or “A Man with a Load of Mischief,” not to mention, of course, the recently revived “The Mystery of Edwin Drood.” But the conceit of “Drood” was on the narrative done in a consciously music hall style, which is less the case here.

With a droll book and lyrics by Robert L. Feedman and witty music and lyrics by Steven Lutvak (deftly orchestrated by Jonathan Tunick), the story tells the tale of impoverished Monty Navarro (Bryce Pinkham), whose late mother had, unbeknownst to him, been related to the wealthy D’Ysquith family, until she was disinherited when she dared marry a commoner for love. Monty figures out that there are only eight D’Ysquiths standing between him a fortune, and blithely decides to bump each off, and take his rightful place as the Earl of Highhurst.

All of the human obstacles in his way are impersonated by the extraordinary Jefferson Mays in a simply wondrous performance, playing everything from a doddering hypocritical parson to a twit of a beekeeper to an imposing philanthropic matron.

Pinkham makes a charming anti-hero, holding the stage most capably all evening. Lisa O’Hare channels the film’s Joan Greenwood as Monty’s lovably mercenary first love (and then mistress), lovely-voiced Lauren Worsham is his sweet cousin (and soon fiancé), veteran Jane Carr is the old friend of Monty’s mother who reveals Monty’s lineage. and other roles are sharply taken by Eddie Korbich, Joanna Glushak, and others.

Alexander Dodge’s striking scenic design pleases the eye from the get-go: a plush red velvet curtain and an Edwardian stage within the stage, all of which bolsters the show’s presentational concept and theatricality. Linda Cho’s costumes are equally apt and pleasing.

Lutvak’s score bubbles merrily along, with some very nice nuggets along the way, including a hilarious double entendre duet for Monty and the fey beekeeper, “Better with a Man” and the show’s most clever number, “I’ve Decided to Marry You” ” (both wittily choreographed by Peggy Hickey) that has Monty trying to keep the two women in his life from meeting when both turn up in his flat. There are several patter songs like “Poison in My Pocket” that hearken back to the Gilbert & Sullivan tradition.

What a pleasure to encounter a literate new musical that doesn’t sound like yet another Sondheim rip-off, or one crassly geared to the pop charts.

The evening has been directed by Darko Tresnjak with sly wit and high style.