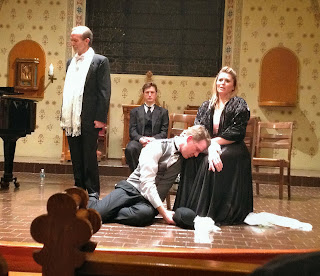 Artistic Director Alyce Mott’s premiere effort for her VHRP Live! company (that’s the Victor Herbert Renaissance Project, if you were wondering) – an abridged, concert version of Herbert’s 1899 operetta rarity “Cyrano de Bergerac” -- was a delight even with no chorus, no orchestra, and a cast of merely five.

The beauty of Herbert’s score shone through with great clarity, thanks to excellent soloists and sympathetic piano accompaniment. Dedicated operetta fans might have heard this score in 1999 when the late Dino Anagnost conducted a large scale concert of (more or less) Mott’s same version at Alice Tully Hall. And there was also a full orchestra version this past July from the Lyric Theatre of San Jose, but apart from those performances, the piece has been unheard for well over 100 years.

At Alice Tully, I recall, the large orchestra played superbly, which was usually the case when Anagnost took to the podium for his biannual Herbert concert, and the large chorus made a gorgeous (if sometimes unintelligible) sound. Sally Ann Howes was the narrator, filling in bits of the plot with her trademark grace.

In VHRP’s version, operetta veteran David Seatter handled the narrator role (and a few other parts) with engaging verve and charm.

The leads in this triangular story were all solid, acting with sincerity and commitment within the restrictions of a semi-staged presentation. Nathan Brian essayed the title character with the requisite panache, albeit without the pronounced proboscis, though he got to keep his “Song of the Nose.” (A minor carp, but he surely should have been allowed a little putty for that most key plot point.)

Tenor Stephen Faulk was ideally cast as Cyrano’s handsome, tongue-tied rival Christian, singing with mellifluous tone throughout. And pretty Olga Xanthopoulou made a vocally assured Roxane starting with her opening number, “I Am the Court Coquette,” scaling down her big voice admirably. There was able work, too, from John Greenleaf in the speaking role of Comte de Guiche.

All of Herbert’s numbers were attractive, and the balcony scene, wherein Cyrano feeds Christian his lines to woo Roxane (“Let the Sun of Thine Eyes”) was particularly beautiful with Brian, Faulk, and Xanthopoulou blending stunningly, as they did again later in the show.

As the original libretto by lyricist Harry B. Smith is lost – though apparently no great shakes, as it is said to have vulgarized Rostand’s original, and made Cyrano more buffoon than hero – Mott is to be commended for stitching the extant songs to Rostand’s text, and giving the piece more gravitas than that original, which actually included a happy ending for all the characters!

Here, the plot faithfully mirrored the play right down to the touching convent scene with Roxane and the now dying Cyrano, sensitively played by Brian and Xanthopoulou.

While this version can’t take the place of the full score, but it certainly serves Mott’s purpose of whetting the appetite for a full production!

At the start of the evening, Mott announced more “pocket” presentations to come, and also a full scale mounting of Herbert’s grand opera, “Natoma,” in July at the Manhattan Center. I can’t wait.

Photo: James Cooper
Print this post
Posted by Harry Forbes at 9:32 AM