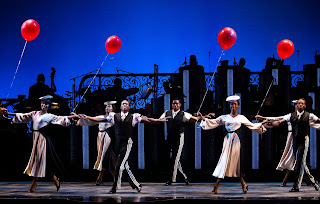 “After Midnight” gets my vote as the most richly entertaining musical on Broadway at the moment. Ultra-stylish, endlessly inventive, and marvelously performed, this evocation of the glory days of Harlem’s Cotton Club is pure heaven from start to finish, the kind of show that has you checking your watch in the hope that the 90-minute running time won’t be soon coming to an end.

The show began life as “The Cotton Club Parade” at Encores. I didn’t have a chance to see the show, conceived by Jack Viertel, so I can’t report on how much it may have changed, but what’s onstage at the Brooks Atkinson is pretty near perfection.

Pop singer Fantasia Barrino, who received acclaim when she replaced LaChanze in “The Color Purple” a few years back, is the first of a planned succession of guest stars, and she’s a delight, radiating true star quality, and delivering mesmerizing versions of “Stormy Weather” and “I Can’t Give You Anything But Love,” bringing down the house with Cab Calloway’s “Zaz Zuh Zaz,” and even doing some hoofing in “On the Sunny Side of the Street.” Her voice is a piquant mix of Billie Holiday and Nell Carter.

The Jazz at Lincoln Center All Stars, under the direction of Daryl Waters, are simply a sensation, playing the wickedest, down and dirty, bluesy accompaniment you’ll hear in town. They’re given a couple of chances to shine on their own, including Ellington’s “Braggin’ in Brass,”

The biggest surprise is Tony winner Adriane Lenox from “Doubt” belting out a pair of raunchy numbers, “Women Be Wise” (“Don’t Advertise Your Man”), and later, “Go Back Where You Stayed Last Night,” and milking them for every ounce of delicious innuendo.

Warren Carlyle’s wondrous direction and choreography keeps surprising time and again. “I’ve Got the World on a String,” for instance, performed by the evening’s other guest star Dulé Hill, holding a balloon aloft, and soon joined by the rest of the company, similarly outfitted, is a real charmer.

Carrlyle's endlessly imaginative staging include a funeral sequence (Ellington’s “The Gal From Joe’s” leading into his “Black and Tan Fantasy”) that sees the corpse coming out of the coffin and dancing up a storm (that’s Ms. Plantadit in angry, defiant form as her deceased character struts her stuff for one last time).

This is joyous entertainment from start to finish.