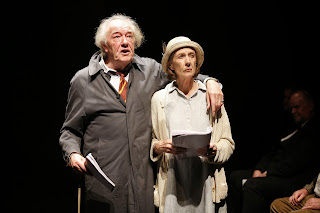 There’s no denying it’s a treat to see those great British actors Eileen Atkins and Michael Gambon in the intimate space of 59E59 with a fine supporting cast including veteran Frank Grimes, a Tony nominee for “Borstal Boy” in 1970, and all directed by Trevor Nunn no less.

What some might consider the rub is their chosen vehicle: a 1957 radio play by Samuel Beckett, which his estate dictated be always performed as such. Thus, Cherry Truluck’s set design is a radio studio with the actors formally lined up on either side of the stage, scripts in hand (also specified by the estate), until it’s there turn to speak. Radio sound effects abound; if Atkins walks across the stage, for instance, we hear off-stage footsteps signaling her movements to the "broadcast" audience.

The play, set in Ireland, is not without humor, but despite the jolly visages of the stars on the production’s poster, this is hardly a knee-slapper; in fact, writing the piece profoundly depressed the playwright himself. But among the lighter moments is some amusing physical business about getting elderly obese Mrs. Rooney into a truck.

Atkins’ recounting of her journey to pick up her blind husband from an arriving train – meeting, along the way, a young man with a dung cart (Ruairi Conaghan), an old man on a bicycle (Grimes), a racecourse clerk (Trevor Cooper) in a car, and pious Miss Fitt (Catherine Cusack) – becomes ultimately taxing, despite the actress’s superb delivery.

Still, she skillfully shows how her complaining character, though unhappy, is ever game nonetheless. And however much the weight of the world seems to burden her, she remains touchingly resilient. Gambon joins her about halfway through the play’s intermission-less 75 minutes, and demonstrates both sly wit and considerable ferocity at key moments.

A sinister tone underscores the work, as Mrs. Rooney’s unanswered queries about why the train was delayed become increasingly ominous. And end-of-life matters and death are never far away even in the Beckett’s lighter moments.

The production played London’s intimate Jermyn Street and Arts Theatres, both the equivalent of Off-Broadway venues here, and has come with cast intact. With the great Atkins and Gambon in top form, both runs were quick sell-outs. Off-putting though this play can be, you owe it to yourself to catch these two pros while you can.

Photo by Carol Rosegg: Michael Gambon and Eileen Atkins
Print this post
Posted by Harry Forbes at 4:42 AM