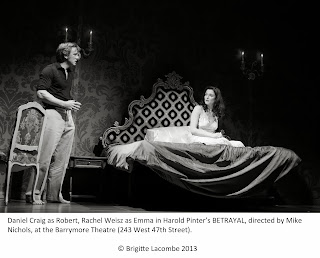 Harold Pinter’s 1978 play about an adulterous affair told in reverse chronology has always been one of his most entertaining and accessible works. I saw the original production with its peerless cast of Daniel Massey, Michael Gambon, and Penelope Wilton at the National Theatre in London, and the fine film version with Jeremy Irons, Ben Kingsley, and Patricia Hodge. Both were gripping.

The play begins in 1977, a couple of years after the breakup of the lovers, and moves backwards to the actual split, then before that to the husband’s discovery of the affair, and finally, to 1968 when wife and lover first click during a party. It’s clear over the course of the play’s 90 minutes that there are more levels of betrayal going on than simply that of the wife and lover. Pinter is said to have been inspired to write the play after his own adulterous affair with journalist Joan Bakewell.

Despite the current production’s three superb actors (Daniel Craig, Rachel Weisz, and Rafe Spall), and the savvy direction by the great Mike Nichols, who’s provided some sexy stage business not in the text, I found this revival oddly less gripping than other productions, though Pinter’s dialogue still registers as clever as ever.

Still, Ian MacNeil’s set of sliding panels skillfully conjures up the various settings of the adulterous flat where art gallery owner Emma (Weisz) and author’s agent Jerry (Spall) have their trysts, as well as publisher Robert (Craig) and wife Emma’s house, a Venice hotel room, and other locales. Ann Roth has provided attractive costumes. James Murphy has provided some rather somber incidental music.

Performance-wise, Craig, Weisz, and Spall are sharply attuned to all the subtle shifts in Pinter’s text, and play it beautifully. Spall is superbly discomfited at various points, such as when he discovers that his best friend Robert knew all along. And his drunken declaration of love for Emma in the last scene (though the earliest time-wise) is a comic tour-de-force.