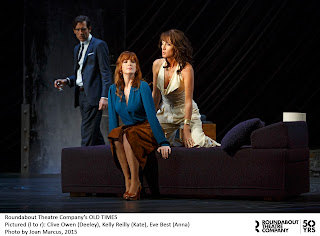 The high-tech, abstract setting designed by Christine Jones (and lighted in kind by Japhy Weideman) to frame the latest revival of Harold Pinter’s 1971 puzzler is visually striking, to be sure, but rather off-putting, too. The action plays out against giant cyclorama of concentric circles and there’s also a slab of ice, some jolting strobes, and an unworldly score by Thom Yorke.

Still, none of these extraneous touches detract from three really superb performances from Clive Owen (in his Broadway debut), Eve Best, and Kelly Reilly, all of whom make this production so worth seeing.

Owen and Reilly are Deeley and Kate, a married couple living in a remote farmhouse. They await the arrival of Kate’s former roommate (Best) from years before. The macho, increasingly menacing Deeley questions the nature of the women's friendship, but the passive Kate’s answers are frustratingly enigmatic.

Soon the glamorous Anna appears (stylishly bedecked in Constance Hoffman’s duds). Incidents from the past – which emerge in contradictory versions – are explored, as Deeley and Anne soon seem to be vying for Kate in a kinky power play.

It's soon apparent that Pinter is playing his usual tricks, and the facts will remain elusive. Has Anna, in fact, died, and is this all an illusion? After all, we see her onstage even before she actually arrives with a torrent of words. Identities are so blurred, we are even led to wonder if Anna and Kate might perhaps be two sides of the same person?

I can’t say I remember the nuances of the original Broadway production (with its stellar cast of Robert Shaw, Rosemary Harris, and Mary Ure), but the setting was certainly more conventional, and the delicious Pinteresque pauses were all characteristically in place. There seem to be far fewer of those now, a curious trend with recent Pinter mountings, including the recent Broadway revivals of “The Homecoming” and “No Man’s Land.” Perhaps it’s that streamlining that causes this production to clock in at a mere 65 minutes.

Still, as directed by actor Douglas Hodge – no slouch at playing Pinter himself (I recall an excellent “Caretaker” in London in which he starred) – the drama, however mysterious, grips.