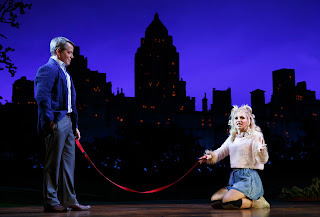 Here’s a stylishly impeccable revival of A.R. Gurney’s whimsical tale of a man in mid-life crisis, whose job has become routine, after his children have left the nest. He develops an overly fond attachment to a dog he picks up in Central Park and which soon comes between him and his English teacher wife.

Matthew Broderick is perfectly cast as the clueless Greg, another of those endearing nebbish characters he does so well, and Julie White has just the right mixture of wariness and empathy as the increasingly frustrated wife Kate. Annaleigh Ashford surpasses her delightful work in “Kinky Boots” and “You Can’t Take It With You” as the titular anthropomorphized pooch. It’s a tremendously physical part which she executes with the dexterity of an accomplished dancer – whether angrily lashing out at a cat, lusting for a male dog when she’s in heat, whimpering in discomfort after being spayed, or bolding nuzzling a matron’s crotch – and her delivery of Sylvia’s dialogue (yes, this pooch talks) is spot-on perfect.

Robert Sella provides more deft comic relief in three roles: Tom, another obsessive dog enthusiast in the park, Phyllis, an upper crust friend of Kate’s from Vassar days, and Leslie, an ambiguously gendered therapist, though he’s perhaps a bit too over-the-top in the last two portrayals.

The setting remains 1995 -- when the play was first produced by Manhattan Theatre Club with Sarah Jessica Parker (Mrs. Matthew Broderick) as Sylvia -- and indeed there are nostalgic references to then-current personalities like Bella Abzug and Kitty Carlisle Hart and others no longer on the New York scene.

For all its considerable appeal (and Daniel Sullivan’s assured direction keeps the fable-like tone of the piece always on the right track), the play does at times feel a stretch for a full evening, with just a few longueurs in the second act. Still, Gurney’s piece is undeniably well constructed, with the playwright scoring valid points about loneliness and the need to connect with others, even with a dog as the conduit. The lovely interlude when Greg, Kate, and Sylvia sing “Every Time We Say Goodbye” at a pivotal emotional moment is most touchingly done.

Ann Roth’s costumes are just right for these prototypical WASPY Gurney characters. David Rockwell’s gorgeously verdant, skyline-backed Central Park setting – and the inset of Greg and Kate’s well-heeled apartment – expertly lighted by Japhy Weideman, are a pleasure throughout the evening.

At the end, you may find yourself slowing your exit to watch a projected doggie gallery (described in the Playbill) –- the “Friends of Sylvia” -- after the curtain calls. A nice touch.

Photo: Joan Marcus
Print this post
Posted by Harry Forbes at 10:33 AM