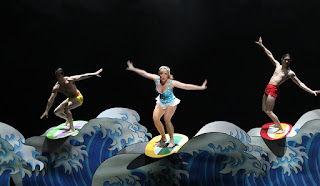 You might imagine, from the sound of it, that this latest jukebox musical which has just opened on Theater Row – one culled from songs of the 1960s – is some small-scale rinky-dink affair. But you’d be way off-base, for director/choreographer James Walski’s psychedelic creation is, in fact, a surprisingly lavish, high-tech production that would visually hold its own just fine on a big Broadway stage.

And the cast of seven principals and an ensemble of more than double that figure in undeniably talented. But for all of that, the show is chilly, mechanical, and utterly impersonal even with its seemingly sure-fire hit parade of tunes ranging from “Windmills of Your Mind” to “Born to Be Wild.”

There’s no dialogue, but the more than two dozen songs are strung together to tell a sort of story. as Walski describes in a program note how the show’s central figure Caroline (Kelly Felthous) “falls down the rabbit hole and [takes] a magic mushroom.” The “dream” that follows has her falling in love with sensitive Adam (Austin Miller), marrying, and parting. Peter (Joey Calveri) bodypaints Crystal (Tara Palsha), suffers heartbreak and enlists in the army. Meanwhile, the very cool Jennifer (Dionne Figgins) auditions on a soundstage. And so on.

Laurie Wells is Angela (though, mind you, the character names mean little), and she gets to sing the serious ballads such as “Both Sides Now,” “Lover’s Concerto,” and “The Way of Love.” Her voice is rich and mellow, but there’s a generic quality to her vocals and all the others in the show, so we’re kept at an emotional distance.

Felthous, for her part, has a high, adenoidal voice that carries her through “Where the Boys Are” and “Downtown.” Miller gets the folksy ballads “Where Have All the Flowers Gone?” and “Blowin’ in the Wind.” While David Elder as George has such extroverted numbers as “It’s Not Unusual, ““The Girl from Ipanema” to “I Saw Her Standing There.”

Figgins stands out as especially dynamic from her entrance number “These Boots Are Made for Walkin’” onward.

The orchestrations by Martyn Axe are strictly contemporary, and indeed the program tells us the “time” is “now” so this is the 1960s through a present-day filter. The arrangements are slickly professional, and I did enjoy the driving beat of “I Saw Her Standing There,” “Nowhere to Run,” and some of the others. But in most instances, the integrity of the original tunes is coarsened.

But there’s no denying Walski’s choreography is quite dynamic, and sharply executed by the cast.

Robin Wagner and Walski’s set designs are always eye-filling and sometimes clever, such as the surfing backdrop for “Wipe Out” early in the show. Other times, they’re far too literal. “Moon River” is sung against a big full moon, and yup, the requisite shimmering river. “Up, Up and Away” is sung as a hot-air balloon is about to rise (and, of course, it does). “Downtown” plays out against a Times Square backdrop.

The show originated in Osaka, and indeed, there was a profusion of Asian tourists in the lobby. The rest of the audience, at least those around me, were, shall we say, not the classiest, eating, talking, and texting throughout the two-act evening.