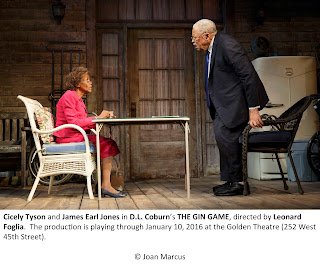 What a pleasure to see stars James Earl Jones and Cicely Tyson operating at the top of their nuanced, comedic and altogether endearing game!

Casting them as the alienated-from-society nursing home loners in D.L. Coburn’s 1977’s Pulitzer winner – the first Broadway revival since Julie Harris and Charles Durning in 1997 – was, as it turns out, a masterstroke. This is, as they say, a star vehicle, and these two consummate pros more than fit the bill, as cannily directed by Leonard Foglia.

Fonsea (Tyson) enters the play in tears, though we don’t really understand her issues till later in the play. She meets grumpy long-time resident Weller (Jones) on the porch, and soon reveals she has diabetes, while he quips that he’s merely suffering from the malady known as extreme old age. Weller convinces the disingenuously reticent Fonsea to join him in a hand of gin rummy.

Though she claims ignorance of the game, she beats him at the game straightaway, and then proceeds to do so again and again during the course of the play. Her easy triumphs unleash Weller’s not inconsiderable temper, a pattern that runs through all their subsequent games. Fonsia will say she’s had enough, and then relent for another hand. Throughout all of this, they share their backgrounds, nurture a growing fondness (which peaks when Fonsia persuades him to join her in a brief dance), and fight like the dickens, while the sad reality of their respective situations comes to light.

Jones’s Weller is all grumpy bluster, but he shows us the compassionate side that coexists with the volcanic outbursts. Tyson’s Fonsea is smart as a whip, and cute as all get-out, but reveals the vulnerability and pain beneath the assured demeanor. Tyson’s easy-going victories at cards are a non-stop delight, as is Jones’ escalating incredulity and raging temper.

Much has been made of the stars’ ages – Tyson (90) and Jones (84) -- but their performances are, in fact, as vigorous as any, and they deliver their copious dialogue sharply, no mean feat, since each hand of gin is so very similar to the one that comes before it. David Van Tieghem’s sound design is clean and natural.

You can still see Jessica Tandy and Hume Cronyn’s indelible original performances on YouTube in a fuzzy black and white print. And it's clear that Jones and Tyson more than live up to those legendary creators.

Riccardo Hernandez has designed a characterful cluttered porch setting strewn with old furniture, wheelchairs, and the like (along with the stars’ very apt costumes), and it’s been warmly lighted by Jules Fisher + Peggy Eisenhauer.