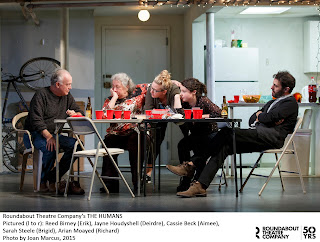 Playwright Stephen Karams’s follow-up to his roundly praised “Sons of the Prophet” is another sensitively written, finely acted domestic drama, this one approaching the surreal as the humorous elements give way to something darker, in the both figurative and literal senses.

Eric and Deirdre Blake (the oh-so-fine Reed Birney and Jayne Houdyshell) and their lesbian daughter Aimee (Cassie Beck) have arrived from Pennsylvania along with Eric’s dementia-afflicted mother “Momo” (Lauren Klein) to share Thanksgiving at the new tenement apartment of their daughter Brigid (Sarah Steele) and her boyfriend Rich (Arian Moayed).

Eric seems strangely preoccupied from the moment they walk in. The apartment, though a spacious ground floor duplex (the second floor below ground), has ominous sounds (enormous thuds from above, the compactor, the laundry room), and as if that weren’t enough, the light bulbs begin blowing out one by one.

Furthermore, though the general tone is convivial with plenty of humorous banter (and, at times, the play is laugh-out-loud funny), little by little we learn that all is not truly well with any of these characters, as one by one, Karam reveals the problems — financial and emotional — beneath the holiday cheer.

Karam’s dialogue is wonderfully naturalistic; he uncannily captures the rhythms of how families talk (and much of the dialogue realistically overlaps), while subtext abounds. This cast is marvelously adept at conveying the surface situation and all the underlying conflicts.

The tonal shift from naturalism to the surreal, unnerving though it is when it comes, doesn’t come as a total surprise given the hints Karam has given us throughout the evening, and the skill with which ace director Joe Mantello has orchestrated the playwright’s text.

David Zinn’s two-tiered set design brilliantly conveys the unease we are meant to feel from the start. Justin Townsend’s all-important lighting, and Fitz Patton’s sound effects all contribute to the increasingly spooky ambience.

The play, incidentally, derives its title from something Richard says about his favorite comic book in which it’s the monsters relate scary stories about us. “The horror stories for the monsters are all about humans,” he tells the bemused family. But, as events in “The Humans” play out, the symbolism of that image proves unnervingly true.

Print this post
Posted by Harry Forbes at 2:47 PM