Girl from the North Country (The Public Theater) 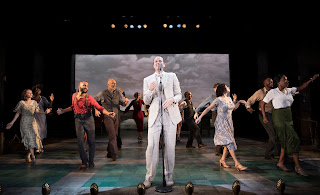 
The unlikely mashup of songs from the Bob Dylan songbook with a script by great Irish playwright Conor McPherson has resulted in a perhaps not-totally-seamless, but on the whole, haunting and bewitching brew.


Premiering to acclaim last year at London’s Old Vic, “Girl from the North Country” concerns a boarding house on the verge of foreclosure in Duluth, Minnesota during the Depression. Nick Laine (Stephen Bogardus) and his mentally fragile wife Elizabeth (Mare Winningham) have under their roof such diverse and sad characters as a lonely widow (Jeannette Bayardelle); an African-American prize fighter (Sydney James Harcourt) just out of jail after being wrongly incarcerated; a once successful businessman (Marc Kudisch), his world-weary wife (Luba Mason who doubles on drums) and childlike grown son (Todd Almond); and a shady reverend (David Pittu).


The Laines have an alcoholic son (Colton Ryan) who’s an aspiring writer, and an adopted African-American 19-year-old daughter (Kimber Sprawl), pregnant but refusing to reveal the father.


Other townspeople who weave in and out of the narrative include the local doctor (Robert Joy), once addicted to morphine, who occasionally narrates from the side of the stage; an elderly shoe mender (Tom Nelis); a widower whom Nick tries to match up with his daughter; and a young woman (Caitlin Houlahan) who was the childhood sweetheart of Nick’s troubled son.


Everyone’s dreams and aspirations seem doomed to failure, like Nick’s furtive romance with the widow. And there are some very dark elements such as sexual assault, violent racism, and even murder.


The songs from the Dylan songbook are presentational in style, and don’t necessarily match the details of the plot but rather comment on or elucidate the spoken parts from which they arise. There are about 20 in all written between 1963 and 2012. Nearly all the principals shine in their respective solo numbers, such as Winningham’s powerful “Like a Rolling Stone,” Harcourt’s “Hurricane”; and Mason’s “Tight Connection to My Heart,” to name a few. The ensemble numbers are especially winning like “Make You Feel My Love” and “You Ain’t Goin’ Nowhere.” Some are done as if in a 1930s radio studio with the old-fashioned microphones. They are beautifully sung and gorgeously orchestrated by Music Supervisor Simon Hale.


The cast is superb across the board.


McPherson himself directs, and is obviously attuned to every nuance. Movement Director Lucy Hinds keeps the dialogue scenes and musical numbers fluid. Rae Smith’s set and costume designs are period perfect. And Mark Henderson’s lighting is skillfully evocative. Simon Baker’s sound design is a model of restraint and clarity.


Technically, “Girl from the North Country” may fall under the category of that much derided term “jukebox musical,” but whatever it is, it’s a work of uncommonly high artistic quality.

Photo by Joan Marcus: Todd Almond and the company of "Girl from the North Country"
Print this post
Posted by Harry Forbes at 9:58 AM