The Lifespan of a Fact (Studio 54) 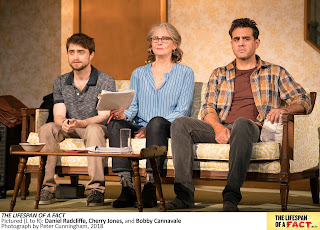 
A meticulous fact-checker at a literary magazine clashes with a writer with scant regard for facts in this entertaining adaptation of the 2012 book of the same name.


A bearded Daniel Radcliffe (very funny and thoroughly convincing as a Yank) plays fact-checker Jim Fingal, and Bobby Cannavale is writer John D’Agata. Their dispute -- which actually played out over several years -- is condensed down to a tension-filled long weekend.


Cherry Jones is Emily, the magazine’s editor who assigns the complex editing task to ambitious intern Jim, a Harvard grad anxious to prove himself, and she is quickly mortified to learn that her distinguished writer has willfully misstated enough facts to fill Jim’s 130-page spreadsheet, all in the name of a greater artistic Truth.


Even at 85 intermission-less minutes, the arguments for factual veracity versus John’s skewed concept becomes just a tad repetitious in the otherwise sharp and witty script credited to the triumvirate of Jeremy Kareken, David Murrell, and Gordon Farrell. But the three stars are so accomplished and such a pleasure to watch, that is of little import. And, humor aside, the basic arguments about truth and facts has particularly added resonance in our present era.


The article in question -- actually, essay as John insists his work be called -- concerns the suicide of a teenager in Las Vegas. But among John’s numerous reworking of facts -- along with such minutiae as the number of topless bars and the name of particular saloon -- is his much more questionable assertion that his subject’s leap off a hotel roof was the only such jumping suicide that day. In fact, a young woman took her life in the same manner, but that detail doesn’t suit John’s poetic vision.


Enjoyable though Cannavale is, as he asserts his view of the role of the artist, the impossibility of ever really knowing truth, and his dismissal of bothersome detail -- and citing such major figures from Cicero to Sontag as his distinguished forebears in truth-twisting -- the arguments against his way of thinking are pretty potent. And though the cocky Jim, for his part, seems on the correct side of the argument, he registers as quite the nitpicker.


Still, it’s great fun to watch the escalating tensions between the two -- which occasionally turns physical -- as Emily tries mightily to play the objective referee, as she grapples with her own shifting ideas of storytelling. Jim has taken it upon himself to fly out to Las Vegas to meet John face-to-face, prompting Emily to follow suit.