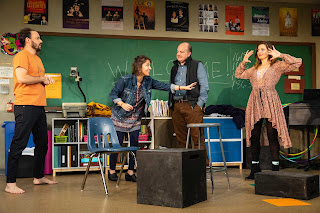 
Larissa FastHorse’s very amusing satire centers around the production of a Thanksgiving Day pageant for elementary school children. The four adult principals, who consider themselves extremely “woke” and sensitive, plot out the play -- which they are determined will not only celebrate the titular holiday but also pay homage to Native American Heritage Month -- and find themselves stumbling over multitudinous hurdles as they consider the actual genocide and violence behind the traditionally benign “coming together” harvest theme.


These include Logan (Jennifer Bareilles), a drama teacher who has secured a succession of grants to finance the show, and her boyfriend Jaxton (Greg Keller), her rather dim street performer boyfriend, both proudly vegan; Caden (Jeffrey Bean), an elementary school history teacher who yearns to be a playwright, and though he has written 62 plays, has never had one performed by adults; and Alicia (very funny Margo Seibert), a self-absorbed LA actress hired for the occasion under the mistaken assumption, based on her head shot, that she has indigenous roots.


Logan stresses that the work will be “fully devised,” meaning that each actor will have input into the final product. As the four tortuously debate how they can cause least offence, they become increasingly stymied as to how they can progress at all. After all, they reason, how can any of these white actors have the temerity to speak for Native Americans?


Though the pretensions of these hyper sensitive folk are ripe for humor, FastHorse shows that the popular perception of the holiday does, in fact, cover a multitude of ills, and along the way, she has some perceptive things to say about how we learn history and the vagaries of the funding world, as for instance how some of the requirements for grants often shape what you actually see on stage.


Besides skewering political correctness and the like, she has plenty of insider jibes about theater, like an especially funny line about dramaturgs.


Wilson Chin’s schoolroom set is spot-on, and Tilly Grimes’ costumes, including those for the opening “Twelve Days of Thanksgiving” song with all four dressed in the conventional Pilgrims (and turkey) attire, add to to the fun.


The play -- originally produced by Artists Repertory Theatre in Portland, Oregon -- runs about 90  minutes without intermission. It does at times seem like a protracted “Saturday Night Live” sketch, but the laughs, as indicated, are plentiful.