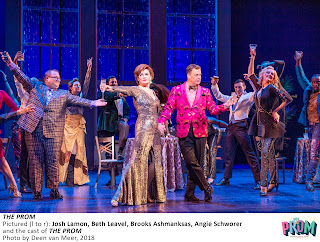 
A group of narcissistic New York theater folk, stung by bad reviews and bemoaning their stalemated careers, decides to reinvigorate their respective reputations by championing a worthy cause. When they hear of an Indiana high school student whose plan to bring her girlfriend to the prom results in the event being cancelled, the four actors and their press agent (Josh Lamon) think they've hit on just the ticket to generate some self-aggrandizing headlines.


Beth Leavel and Brooks Ashmanskas are Dee Dee Allen and Barry Glickman, stars of a roundly roasted and recently shuttered Eleanor Roosevelt musical bio. Christopher Sieber is Trent Oliver, Juilliard graduate (and don’t you forget it) and once in a 1990s sitcom, but now waiting tables, and Angie Schworer is a perennial “Chicago” ensemble dancer never getting her big chance to play Roxie.


At my performance, Leavel, who had taken ill earlier in the day, was replaced by Kate Marilley who was quite marvelous, playing the ego and self-centered star to the hilt with a great voice and assured comic timing. Ashmanskas is a campy whirling dervish who feels special empathy for the high schooler Emma (beautifully played and sung by Caitlin Kinnunen).


Michael Potts is the very empathetic school principal who, surprisingly, happens to be not only a Broadway show fan, and also one long enamored of Dee Dee, whom he invites for dinner at Applebee’s.


Isabelle McCalla is lovely as Emma’s secret girlfriend Alyssa, the daughter of the strident PTA leader (Courteney Collins) who opposes the prom, having no idea of her daughter’s potential involvement.


All the principals get their big musical moments. Schworer’s “Zaaz,” wherein she attempts to liven up the dour Emma with some typical Fosse moves, is a surefire second act showstopper. Ashmanskas brings down the house with his wildly energetic “Barry Is Going to Prom” number. Siebert has a rousing gospel number “Love Thy Neighbor” as he preaches to Emma’s intolerant classmates. And at the reviewed performance, Marilley got to strut her stuff and show what made Dee Dee a star with “The Lady’s Improving."


Kinnunen’s eleven o’clock number “Unruly Heart” is lovely, and ditto her yearning duet with McCalla, “Dance with You.”


Casey Nicholaw -- fresh from mining similar territory with “Mean Girls” -- directs and choreographs with plenty of his customary liveliness and comic sensibility.


I found Brian Ronan’s sound design rather unnecessarily loud and harsh. But no complaints about Scott Park’s scenic design, Natasha Katz’s lighting, or Ann Roth and Matthew Pachtman’s costumes which are all first-rate.