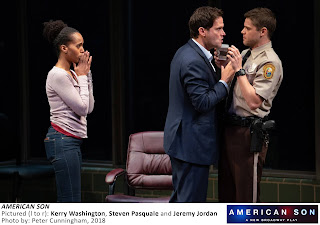 
A separated mixed race couple -- African-American Kendra (Kerry Washington) and white Scott (Steven Pasquale) -- wait anxiously for news of their son Jamal who’s gone missing after leaving home in his car the night before. They fear that as a strapping six foot two black kid with cornrows and baggy pants, he may have run afoul of a bigoted cop, despite the young man’s impeccable education and good breeding. Rookie policeman Larkin (Jeremy Jordan) at the station house is none too forthcoming with details, and the parents’ hysteria grows with each passing moment, as they wait anxiously for the promised officer (Eugene Lee) who will know more.


Christopher Demos-Brown’s play is reasonably suspenseful, and offers four meaty roles to his actors, especially for Washington, but this feels rather like a TV police procedural with a didactic overlay of Black Lives Matter and present day race relations messaging. Still, those vitally important issues are intelligently presented from every angle.


At my performance, I felt the crowd was a bit restless, though the candy wrappers and fidgeting subsided as the play neared its tense climax, and gave the cast a deserved enthusiastic ovation at the end.


Demos-Brown does his best to to give us conflict, but one has to suspend some disbelief as each time Larkin or Lieutenant Stokes seems about to impart a tidbit of crucial information, the parents’ aggressive questioning hardly allows the officers to impart what they know.


Racial tensions come to the fore not only between Kendra and Scott and the officers, but between themselves as they seemingly never did during their years of marriage. Jamal was primed to go to West Point, but it seems he had conflicting issues. And though Scott believes he has a good relationship with Jamal, there were serious identify issues, and Jamal was deeply disturbed by Scott’s walking out on Kendra.


I’m reluctant to give more details as even the smallest points are revealed very slowly.


Washington has the lion’s share of dramatic outbursts and superbly displays the emotions of an understandably distraught mother. She arrives at the station house first, and indignantly rebuts the rookie’s suggestions that her Emily Dickinson-quoting son might have a street name or a gold tooth. Pasquale whose character is an FBI man and tellingly, is able to wrest more information from Larkin than his wife had done, has the requisite authority. Jordan, in a rather startling and impressive change of pace, does very well as the doltish cop putting his casually racist foot in his mouth at every turn. And Lee strikes just the right note of paternal empathy and no-nonsense authority when he makes his late entrance.


Kenny Leon directs with customary skill, keeping the tension as taut as the didacticism of the play will allow.


Derek McLane’s set -- the waiting room of a Miami police station --  feels as coldly desolate as such a place would in the wee hours of the morning, with complementary lighting by Peter Kaczorowski.


Peter Fitzgerald’s sound design, including the realistic thunderstorm outside, adds to the bleak ambience.


The ending of this one act play is shockingly abrupt, but the audience responds emotionally, demonstrating they were, in fact, absorbed all along.