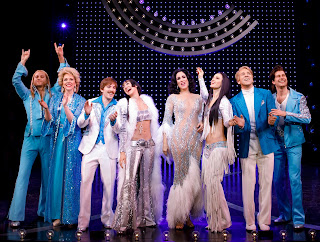 
If you saw “Summer: The Donna Summer Musical” (soon to close), you’ll be forgiven for a nagging sense of deja vu in that both that jukebox musical bio and this one coincidentally share the same basic structure of three women playing their titular star at different stages of her career.


However, as Rick Elice’s book for this one is several degrees stronger than the one for “Summer,” and the triptych of stars are overall better utilized, we can forgive the similarity.


Stephanie J. Block, who made her Broadway debut several years ago playing Liza Minnelli in “The Boy from Oz,” again very successfully assumes the persona of a famous entertainer in her iconic Star stage. She has the voice and mannerisms down pat. And, to their considerable credit, so do Teal Wicks and Micaela Diamond as the middle period (Lady) and teenage (Babe) versions of Cher. Part of Elice’s conceit is to have the three talking amongst themselves rather in the manner of Edward Albee’s “Three Tall Women.” (Thereafter all similarities to that towering Pulitzer Prize-winning work end.)


Elice has captured the “voice” of the public Cher, her sardonic humor and nonchalance, and the three ladies have done so as well.


The narrative starts with Cher, the troubled teenager dealing with racial taunts at school for being a half Armenian “half-breed,” as her later hit song would immortalize, albeit with a Native American slant, though she is bolstered by her warmly supportive mother Georgia (Emily Skinner). Her innate shyness starts to erode when she meets the controlling Sonny Bono (Jarrod Spector) who eases her way into show business, first as a backup singer for Phil Spector (Michael Fatica), then as half of the act that would soon be known as Sonny & Cher. We see their initial success in the U.K. on the Top of the Pops television series, then getting their own successful television series, marital squabbles and divorce, the TV reunion, Cher’s romance with Gregg Allman (Matthew Hydzik) and his substance abuse issues, her affair with a bagel guy Rob Camilletti (Michael Campayno) and ultimately, her success as an Oscar-winning film star and a solo vocal artist.


I’d say Douglas McGrath’s script for the Carole King musical “Beautiful” set the gold standard for incorporating a star’s hit parade into a reasonably mature telling of a life story. Elice, who co-authored the “Jersey Boys” book, doesn’t measure up to that, but at least Cher’s bumpy relationship with Sonny, and other personal and career pitfalls are not glossed over.


Various luminaries make cameo appearances here. There’s her ace designer Bob Mackie (Michael Berresse), The Dave Clark Five (actually not much like that popular group), a rather crude travesty of a Lucille Ball impression by Skinner as she advises Cher to dump Sonny as she did Desi, and Robert Altman (Berresse again) who pep talks Cher in her Broadway acting debut. (It was “Come Back to the Five and Dime, Jimmy Dean, Jimmy Dean,” though the title is never mentioned.)


Christopher Gatelli’s choreography captures all the moves you’d expect. The “Dark Lady” number with an excellent Ashley Blair Fitzgerald and some hunky male dancers got one of the biggest hands of the evening.


Bob Mackie himself has designed the costumes which are replicas (or close approximations) of the censor-worrying ones Cher actually wore.


Daryl Waters’ music supervision, orchestrations and arrangements pay appropriate homage to the original charts, except when the hits are used as part of the narrative, as when, for instance, Gloria enjoins Cher “You’d Better Sit Down Kids,” or Lucy improbably does “Heart of Stone.” But “I Got You, Babe,” “Gypsies, Tramps and Thieves” and even her weekly “Vamp” song from the TV series are all here.


I do wish they had found a way to incorporate some of Cher’s lovely early covers of material such as “Sittin’ on the Dock of the Bay” and “Blowin’ in the Wind” but, as it is, the evening quite a songfest.


Jason (“Avenue Q”) Moore directs with the requisite affinity for the material.


Photo by Joan Marcus: The Cast of THE CHER SHOW on Broadway
Print this post
Posted by Harry Forbes at 12:57 PM