Mother of the Maid (The Public Theater) 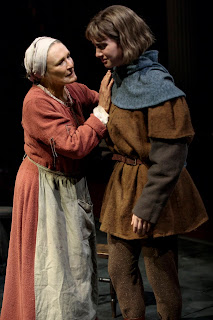 
This clever and absorbing play tells the familiar story of Joan of Arc from the perspective of the saint’s mother. In playwright Jane Anderson’s hands, it’s a conceit that really works.


And best of all, it provides a great vehicle for Glenn Close in her first New York performance since her much acclaimed resurrection of Norma Desmond in “Sunset Boulevard.” And what a contrast!


Without makeup and outfitted (by Jane Greenwood) as the very picture of a hardworking, pragmatic farmer’s wife leading a hardscrabble existence. By turns simple, wise, critical, loving, determined, sorrowful and bravely steadfast, she runs an impressive gamut.


As for Joan -- beautifully played by Grace Van Patton -- she’s first a moody teenager, concealing the miraculous vision she finally admits to her mother Isabelle, then increasingly confident in her mission, but this is Isabelle Arc’s story.


Neither Isabelle nor her husband Jacques (an excellent Dermot Crowley) trust the veracity of Joan’s heavenly injunction to lead an army, and adamantly oppose her stated plan to rout the English who are occupying France. In fact, Jacques beats her and orders her brother Pierre (Andrew Hovelson) tie her to her bed.


But the local priest Father Gilbert (Daniel Pearce) intercedes and informs them the local bishop truly believes her story. The parents -- still skeptical -- eventually get on board and even follow Joan to the Dauphin’s court, though at first Isabelle comforts herself that Joan’s presence in the army is only “to keep the soldiers cheerful.”


There, Nicole (Kelley Curran in a lovely performance), a gracious court lady, takes Isabelle under wing and expresses great regard for Joan and admiration for her mother, but Isabelle will not be patronized. Pierre is made a knight and sent into battle with Joan, while Jacques, ever a caring father despite his gruffness, enjoins Pierre to look after her.


The narrative follows its inevitable course, but as it’s all from Isabelle’s perspective, if you think you’ve had your fill of Saint Joan this year -- after Manhattan Theatre Club’s solid revival -- you needn’t worry that this play covers the same ground.


Anderson’s dialogue -- a mix of period and present-day jargon (and expletives) -- seems entirely apt throughout. (The playwright wrote the screenplay for Close’s acclaimed film “The Wife.”)


Director Matthew Penn draws fine performances from all and helms a well-paced production right from the start up through the moving last moments.


Photo by Joan Marcus: Glenn Close and Grace Van Patten
Print this post
Posted by Harry Forbes at 9:08 AM