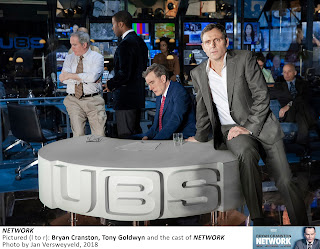 
I must confess I have not been the keenest fan of trendy director Ivo van Hove, but this exciting production of “Network,” based on the 1976 film by writer Paddy Chayefsky, may have just turned the tide for me. Following the screenplay virtually verbatim, this stage adaptation -- acclaimed at London’s National Theatre -- proves quite a thrilling piece of theater, and Bryan Cranston knocks it way out of the park with his sensational performance in the Oscar-winning Peter Finch role of Howard Beale, a network anchorman whose firing after 25 years leads to an on-air breakdown.


That breakdown -- including an audacious vow to kill himself on air in a week’s time -- leads to high ratings and a callous decision on the part of the fictional UBS network brass to keep him on the air. The decision is fueled by ratings-crazed programming chief Diana Christensen who takes control of the show.


The movie cast of Finch, William Holden, Faye Dunaway, and Robert Duvall was pretty unbeatable, but in addition to Cranston’s outstanding work here, Tony Goldwyn and Tatiana Maslany perform impressively as news chief (and Beale friend) Max Schumacher and ruthless programming head Diana Christensen who wrestles the now high-rated “Howard Beale Show” (Beale now labeled the “mad prophet of the airwaves”) away from Max, while engaging in a torrid affair with the aging (and long-time married) news veteran. (There’s an exceptionally vivid simulated sex scene, which follows a live conversation between Max and Diana on the street outside the theater before seamlessly moving into the alley and then onto the stage.)


Not all the roles are as felicitously cast as the three principals, but certainly Alyssa Bresnahan is outstanding as Max’s wife, and delivers her impassioned speech to Max about his infidelity with much the same bravado as Beatrice Straight in the film. Nick Wyman also makes the most of his role of Communications Corporation of America head, who appears God-like on a high platform, as he puts Howard in his place about the economic realities of television.


Faithful as Hall has stayed to Chayefsky, much of the detail of the Ecumenical Liberation Party, the radical organization that Diana enlists to provide real-life terrorist footage, has been trimmed in favor of the main story arc.


Jan Versweyveld’s set, a mass of video screens both large and small (mirroring the TV monitor imagery of the film), and segmented playing areas for control room, set, office, bar, is highly effective. When an area is out of one’s sightline, one can always watch the screens. And hand-held cameras are able to follow Cranston’s every move, adding a rare intimacy to his performance. Tal Yarden’s video design, so important to the overall concept here, is quite outstanding; period commercials and actual news footage of the period abound.


An D’Huys’ costumes and Eric Sleichim’s sound design and music are also tops.


Adapter Lee (“Billy Elliot”) Hall kept the time frame as it was in the film, with references to Patty Hearst, Gerald Ford, and so on, but the overall vibe seems resolutely contemporary. Certainly, the themes are still uncannily relevant: the public’s mindless devotion to the tube (though, of course, now we would add the internet), the obsession for high ratings at (almost) any cost, the public’s disaffection for the status quo, and the mindless adulation of a demagogue figure.


Though the Belasco audience dutifully shouts out Beale’s “mad as hell” trademark slogan as requested by the UBS warm-up guy (Barzin Akhavan), there’s plenty of genuine response during the post-show video showing a succession of presidential inaugurals. The Obama sequence, for instance, is, predicatably, roundly cheered, while the one for You-Know-Who generates almost frighteningly vociferous booing.


But political matters aside, Cranston is delivering one of the major performances of the season and must not be missed.