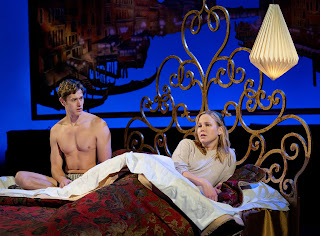 
Faith in a higher being is pitted against hard-nosed science in Tom Stoppard’s latest play which was first mounted in London in 2015. It was Nicholas Hytner’s last production as head of the National Theatre, and it was the great playwright’s first new play in nine years.


At about one hour and 40 minutes, without intermission, and with an appealing heroine to give humanizing ballast to the intellectual arguments, “The Hard Problem” – that is, getting to the roots of human consciousness -- proves rather less daunting than some of his other works, which is not say that you might not find yourself a bit muddled somewhere along the line.


Cannily directed on this shore by Jack O’Brien and sharply acted by an expert cast, it has much to commend it. The action plays out on David Rockwell’s attractively adaptable set, lighted by Japhy Weideman. Catherine Zuber has provided the apt costumes. There’s an affecting piano score by Bob James.


When we first meet Hilary (Adelaide Clemens), she’s a psychology student applying for a position as a research assistant at a neuroscience think tank, the Krohl Institute for Brain Science. Despite vastly different worldviews, she embarks on an affair with her tutor Spike (Chris O’Shea).


Hilary believes in God, and says her prayers every night, while sincerely endeavoring to be a good person, a concept of dubious merit to Spike who believes, much like her other colleagues at Krohl, that altruism is merely a form of Darwinian self-interest. Hilary’s fervent prayers concern the child she had as a teenager and had to give up. In one poignant scene, she asks the atheistic Spike to pray for the girl whose whereabouts she doesn’t know. But Spike refuses, even challenging the genuineness of maternal love.


The play wraps up with a resolution that is either proof of Divine Providence or simply an instance of mere chance.


The cast is excellent including Eshan Bajpay as Amal, a fellow applicant to the Institute, then colleague, Robert Petkoff as her supervisor Leo, Karoline Xu as her adoring math genius protégé Bo, and Jon Tenney as her alternately sensitive and hard-nosed hedge-funder who runs the Institute with the hope of finding a connection between the brain and financial patterns.


Print this post
Posted by Harry Forbes at 4:40 PM