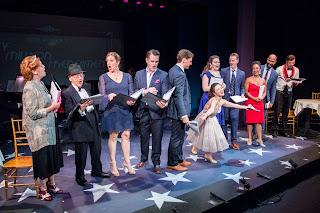 
York’s "Musicals in Mufti" Cole Porter celebration has kicked off with a rare staging of the composer-lyricist’s 1929 hit, one which -- according to Porter historian Robert Kimball who spoke at the talkback after my performance -- was a crucial show in Porter's development. From that point on, Kimball contends, Porter was a major creative force on the Great White Way.


I first encountered the piece -- one of Porter’s best, chockablock as it is with one good tune after another -- at a 1991 concert performance at the Alliance Francaise, led by conductor Evans Haille who, together with Tommy Krasker, lovingly restored the score for the Cole Porter Centennial, and came up with a performable acting edition. The original company had well over 100 players, unrealistic in a modern economy.


That concert led to a marvelous recording still available on New World Records.


As chance would have it, Haile is now York’s Executive Director at the York, so he was on hand to provide half of the sprightly two-piano accompaniment, along with David Hancock Turner. With the period-perfect addition of Dan Erben’s banjo, the score tripped along merrily.


Since that 1991 resurrection, New York has seen the show -- which, among its treasures features the standard “You Do Something To Me” -- on a few more occasions. There was London’s Lost Musical series, led by Ian Marshall Fisher (also at the Alliance Francaise), Barbara Vann’s shoestring Medicine Show (which had actually predated the aforementioned concert in 1983, though she revived it in 2012), and Mel Miller’s Musicals Tonight. Most satisfying of all, Ohio Light Opera mounted a terrific full-scale staged production with orchestra just last year.


Though the title is “Fifty Million Frenchmen,” the focus of Herbert Fields’ book is actually not on the French, but a collection of  Americans visiting Paris. Wealthy Peter Forbes (Andy Kelso) becomes enamored of Looloo Carroll (Evy Ortiz), travelling with her social-climbing Indiana parents (Karen Murphy and Ray DeMattis). Peter’s mischievous friend Billy (Cole Burden) bets him $50,000 he can’t win Looloo’s heart and hand in a month’s time without his usual financial resources in hand. A fixed horse race critically figures in the plot before (spoiler) Peter wins the girl minutes before the bet’s deadline.


Wade McCollum is solid, has has some bright bits as Hotel Claridge manager (and sometime maitre d’) Louis Pernasse, and Sam Balzac is amusing as a waiter.


The youthful cast was attractive, if frankly not in the same league as that of the 1991 production with its blue-chip lineup of Howard McGillin, Kim Criswell, Jason Graae, and Karen Ziemba. Still, considering the present players had only first seen their parts a few days earlier and mine was technically only the third preview performance, they can be cut some slack, several instances of not projecting adequately notwithstanding. Satisfyingly delivered, however, were Murphy’s “The Queen of Terre Haute,” Burden’s “I Worship You,” McCollum and Balzac’s “It Isn’t Done,” and Cates’ “Where Would You Get Your Coat?” and “The Tale of the Oyster.”


Director Hans Friedrichs kept things moving with nicely resourceful staging. Trent Kidd’s choreography was another plus, allowing Bevis and Trumble a happy interlude with “You’ve Got That Thing”  and Trumble and Ortiz with “Let’s Step Out,” especially.


(The York Theatre Company at Saint Peter’s (entrance on East 54th Street, just east of Lexington Avenue; 212-935-5820, or online at www.yorktheatre.org; through October 6)