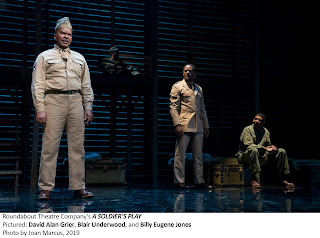 
Charles Fuller’s 1981 Pulitzer-winner, a jewel in the crown of the old Negro Ensemble Company, and one which has generated two Off-Broadway revivals, finally makes it to Broadway courtesy of the Roundabout. It’s a classy, well-acted production with some sharp directorial touches by Kenny Leon, including a significant amount of song and stylized movement.


Still, I couldn’t help feeling that the procedural structure -- so very familiar from TV -- makes the play a little less groundbreaking than the original production with such future lights as Denzel Washington and Samuel L. Jackson, and the subsequent film (titled “A Soldier’s Story”), must have seemed.


The setting is a segregated Army base in 1944 Louisiana. The black enlisted men, most or all veterans of the Negro League, are itching to be sent off to war. In the play’s opening moments, their commanding officer Sgt. Waters (played by veteran of the original production and film David Alan Grier, albeit in a different role) appears on the upper level of Derek McLane’s stylized army barracks set, crazily ranting about how “they’ll still hate you,” when he’s felled by two bullets from an unseen assassin.


The play continues in classic whodunit fashion. The black Capt. Davenport (an authoritative and dynamic Blair Underwood) is sent to investigate, much to the surprise and delight of the men, but the enormous discomfort of the base’s white Capt. Taylor (Jerry O’Connell in a well-judged performance). Upon meeting Davenport, Taylor freely admits to some ingrained prejudice, but his real concern is that if the killing turns out to be a presumed KKK lynching, the locals would never stand for a black man making the charge. (In fact, the base is in lock-down mode to prevent any random reprisals from the men.)


Undeterred, Davenport continues on his assigned mission, interviewing all the men, including a couple of white officers, Byrd (Nate Mann) and Wilcox (Lee Aaron Rosen) with whom Waters clashed the night of his killing.


What Davenport soon discovers is that Waters was universally hated by his men for his disdainful contempt of obsequious blacks whom, he felt, were a disgrace to the race. It is a credit to Grier’s performance that bullying and demeaning though he is, he manages to show us the pain he himself has endured.


But, as we see in the numerous flashback scenes, Waters was quite merciless in taunting the men of whom he was especially critical, including the angry Pvt. Peterson (Nnamdi Asomugha), Private Wilkie (Billy Eugene Jones) whose stripes were taken away from him by Waters, and most especially, the likable, guitar-strumming Pvt. C.J. Memphis (J. Alphonse Nicholson) whom Waters sees as especially emblematic of the “lazy, shiftless” type he disdains. In short, there are a lot of suspects.


The flashback scenes do frankly seem a bit clunky, despite all of Leon’s directorial finesse, and the play overall seems unusually talky, but the mystery aspects certainly keep you hooked, and the overall themes of racism and racial identity are undeniably compelling, and still have contemporary relevance.


The cast is uniformly excellent. Besides those mentioned, there’s outstanding work by Rob Demery as the cocky Col. Cobb, McKinley Belcher III as the wary Pvt. Henson, Jared Grimes as the insecure Pvt. Smalls, and Warner Miller as Cpl. Ellis.