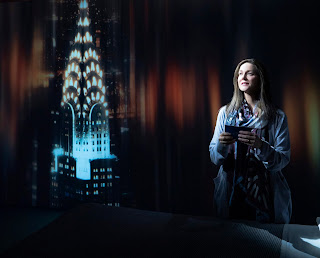 
Laura Linney won unanimous acclaim for her performance in this stage adaptation of Elizabeth Strout's best-selling book when she performed it at London's Bridge Theatre in 2018, and she’s now justly earning the same kudos for reprising the role on Broadway.


The titular Lucy -- who left her Amgash, Illinois home for New York years before to pursue a career as a writer -- lies in a hospital room fighting a serious infection after an appendix operation. Much to Lucy’s surprise, she awakens one day to discover her estranged mother has traveled all the way there to look over her. Lucy marvels at the bravery of the insular woman making her way there on her own. Her mother ends up staying for five days before departing as abruptly as she came, a pattern that will be poignantly echoed later in the play.


The mother, a plain speaking farm woman, warms Lucy with her presence, but it's clear that she had been an emotionally distant parent. And the father, suffering from PTSD, was even worse. We learn that Lucy and her siblings endured lonely childhoods, with beatings and other punishments part of their life. Lucy, for instance, had to endure being locked in her father’s truck for hours on end, once, traumatically, with a snake.


As this is a one-person show, Linney plays both Lucy and her mother. Her portrayal of the mother is finally characterized. One starts to feel two people are on stage, as the mother regales her with homespun stories of what the neighbors, like one Kathy Nicely, are up to.


We do hear of the other people in Lucy’s life, including a particularly empathetic elderly neighbor named Jerry. Lucy's husband is significantly absent at the hospital, but Lucy gets great comfort from a kindly Jewish doctor who faithfully checks on her even on his days off. She keeps in touch with her two young daughters by phone. But the loneliness underneath her upbeat optimism is beautifully conveyed.


Luke Halls’ projection design is outstanding as it shows us everything from the gleaming Chrysler building outside Lucy's hospital room to the aforementioned truck to the green fields of Illinois. Bob Crowley’s spare hospital room set, lighted by Peter Mumford -- Lucy’s bed, a visitor chair, and the window -- are pretty much all but nothing more is really needed. Audience members sit on either side of the stage, as presumably was the case in London.


Richard Eyre directs with an assured sense of drama, understated though it may be. There’s little in the way of conventional plot, but the narrative is emotionally rich.


It seems to me that the novel - which I've not read - has been astutely adapted for the stage by Rona Munro. Even with its first-person narrative structure, the play registers as vital drama, and never feels like an audiobook.


Its 90 intermission-less minutes fly by, and Linney -- in perhaps her most iconic role since she make such a splash as Mary Ann Singleton in “Tales of the City” back in the early 1980’s -- is rewarded with a well-earned standing ovation.


Photo by Matthew Murphy
Print this post
Posted by Harry Forbes at 9:23 AM