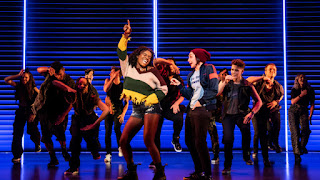 
Though I must confess I had zero familiarity with Canadian singer-songwriter Alanis Morissette’s lauded 1995 album from which many of the songs in the new musical derive, it still seems to me that “Jagged Little Pill”  is head and shoulders above most jukebox musicals.


That’s because the songs (music co-written with Glen Ballard with additional music by Michael Farrell and Guy Sigsworth) are woven into an uncommonly absorbing narrative fashioned by Diablo Cody, the Oscar-winning screenwriter of "Juno." The story she’s fashioned to fit the songs concerns a well-to-do Connecticut family with a heavy dose of dysfunction. As many of my colleagues have pointed out, there are more issues here than you can shake a stick at -- opiod addiction, rape, online bullying, racism, and much much more -- but even so, I never found any of that excessive, so skillfully does the story unfold.


The show has come to Broadway after a successful run at the American Repertory Theater in Cambridge, Massachusetts.


Not being familiar with the album, the songs had no prior associations, and frankly, I found most of the lyrics nearly incomprehensible -- a complaint echoed by several at my performance -- but even so, the general mood of each number was clear enough. If a character was, say, expressing anger or loneliness, those emotions were powerfully conveyed. Perhaps the audibility issues are a result of Jonathan Deans’ sound design (well balanced in the dialogue though) or perhaps it's just the nature of the louder ensemble numbers.


The talent on view is exemplary. Mary Jane Healy (Elizabeth Stanley surpassing all her previous excellent work) is the overreaching mother who has high expectations for her son Nick (Derek Klena) who has just gotten into Harvard (as she just knew he would), leading the boy to feel valued more for his achievements than himself. A car accident has left her hopelessly addicted to painkillers, a fact she conceals from her family, along with another secret potentially even more explosive.


Frankie (Celia Rose Gooding, talented daughter of LaChanze) is the adopted black daughter, a tireless activist for all causes who is secretly involved in a lesbian relationship with her friend Jo (Lauren Patten) until, that is, she meets the cute Phoenix (Antonio Cipriano) at a party. Businessman husband Steve (Sean Allan Krill) is a workaholic, and neglects the disinterested Mary Jane (aka MJ) for internet porn. When outsider girl Bella (Kathryn Gallagher) is raped at a party by Nick’s callous friend Andrew (Logan Hart), we learn that all is even less ideal than MJ’s Christmas letter, which opens the show, would suggest.


With all of the high drama, there are lighter moments and humor in the mix.


The songs (some from the “Jagged Little Pill” album along with other Morissette material, old and new) -- and effectively orchestrated by Tom Kitt -- are superlatively performed. But it is Jo’s angry outburst “You Oughta Know” that emerges as the big showstopper and actually stopped the show with a partial standing ovation at the reviewed performance. But other numbers, sonically muddy or not, make an impression such as “Ironic,” which spins from Frankie’s creative writing class; Bella’s “Predator”; Nick’s “Perfect”; Steve’s “So Unsexy”; and Mary Jane’s “Uninvited.”


Even if the show were devoid of songs altogether, Cody’s book would, I think, make a solid theatrical evening. Director Diane Paulus has worked her usual wizardry to make a cohesive and satisfying evening. Sidi Larbi Cherkaoui provides the lively choreography.

Photo by Matthew Murphy: Celia Rose Gooding and Lauren Patten
Print this post
Posted by Harry Forbes at 11:37 AM