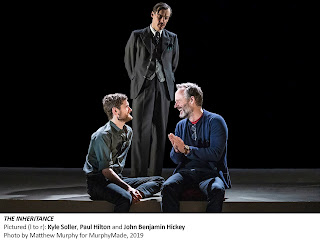 
The London phenomenon which wowed them at the Young Vic before transferring to the West End has come to Broadway with five of the principals from the London cast.


Matthew Lopez’s two-part, nearly seven hour drama -- a present day riff on E.M. Forster’s 1910 novel “Howard’s End” -- centering around  a group of gay men in upper West Side Manhattan is riveting from start to finish. Though comparisons to Tony Kushner’s “Angels in America” are inevitable, and “The Inheritance” shares with its predecessor thematic similarities such as the devastation of AIDS, and the same marathon length, the Lopez play is unique.


The story focuses on Eric (Kyle Soller), a lawyer in a spacious, rent controlled apartment and his lover Toby (Andrew Burnap), a novelist and budding playwright whose play is about to receive a Broadway production. A privileged young man named Adam (Samuel H. Levine) comes into their circle, and audaciously suggests that he might be right for the lead role in the play. Skeptical Toby arranges an audition, and Adam lands the part. Before long, Toby is smitten with him, and when he learns that Eric is about to be evicted from their apartment, he callously calls off their impending marriage.


The shattered Eric subsequently befriends Walter (Paul Hilton), an elderly neighbor who tells of how he took in AIDS patients to the upstate house he shared with his life partner Henry (John Benjamin Hickey), a wealthy Republican real estate executive, much to the latter’s disdain, as Henry had wanted the house to be a refuge from all the death resulting from the AIDS scourge of the 1980s. Before his death, the ailing Walter leaves a scribbled note saying he wants Eric, in whom he discerns a kindred spirit, to have the house, but after his passing, Henry and his two grown sons choose to ignore Walter’s wishes. (That, it seems to me, is the most overt parallel to the Forster plot.)


The title refers not only to the property willed by Walter, but also to AIDS, and, more generally, what one generation passes to the next, be it illness or guilt.


The cast is extraordinary. I had read the script a few months earlier, and while I found the plot compulsively absorbing, I couldn’t quite see the characters in my mind's eye as they are not overtly described in the text. But the cast brings them vividly to life. Hilton doubles as the very humane spirit of Forster exorting the men to be true to themselves, even as the men chide him for not publishing his gay novel, “Maurice,” in his lifetime, though not mentioning that homosexual acts were then still criminal.  Levine also doubles as the pitiable hustler Leo who bears an uncanny resemblance to Adam.


Lois Smith plays Margaret, the sole woman’s part (Vanessa Redgrave in London), and she’s accomplished as ever as the mother who had been estranged from the son who died of age decades before. Her marathon second act monologue is expertly delivered. 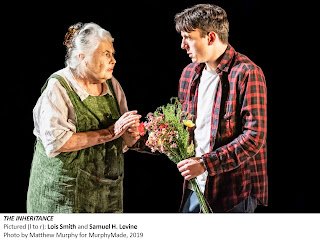 Bob Crowley’s set -- a simple raised platform around which the ensemble  observe and sometimes comment on the central action -- works beautifully, and the disputed property when Eric (and we) finally see it is beautifully realized. Jon Clark’s lighting, Paul Arditti and Christopher Reid’s sound design, and Paul Englishby’s music contribute mightily to the overall classy presentation.


Stephen Daldry has done his usual masterful job directing the proceedings, and the first play ends with a particularly outstanding bit of staging that doesn’t leave a dry eye in the house.