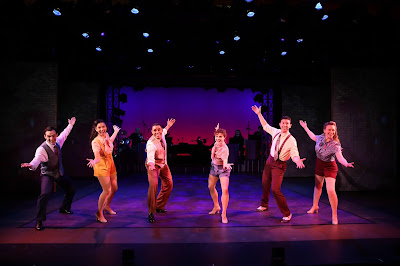 And though the show’s title references one of Berlin’s most familiar standards, show buffs needn’t worry that the songs will be selected from his oversaturated greatest hits. The creators have wisely provided a good deal of rare material to keep things interesting. And even the better known songs -- performed as well and cleverly as they are -- sound freshly minted (thanks to Fred Lassen’s vocal arrangements and orchestrations and Rob Berman’s dance arrangements). The result is just about the finest musical playlist of any show currently in town.

Instead of “Easter Parade” from the film of the same name, for instance, we get “Drum Crazy” and “Better Luck Next Time.” Instead of “White Christmas” from the 1954 film, we hear three other numbers. From the lesser-known 1939 Sonja Henie vehicle “Second Fiddle,” the band does “When Winter Comes” and four of the cast do “I Poured My Heart into a Song.” There’s even a song intended for the 1960s-era film “Say It With Music” that was unfortunately shelved when MGM changed management.

“Cheek to Cheek” skips over the film adaptations of his stage work, so don’t expect “Annie Get Your Gun” or “Call Me Madam,” and I take that as a further plus.

Under the ever creative guidance of director/choreographer Randy Skinner, who also conceived the show, nearly every number takes flight. Over a decade ago, Skinner worked magic in similar territory when he choreographed the Broadway production of “Irving Berlin’s White Christmas.”

And with six immensely likable performers -- Phillip Attmore, Jeremy Benton, Victoria Byrd, Kaitlyn Davidson, Joseph Medeiros, and Melanie Moore -- equally adept at singing and dancing, the fast-paced 80 minute show flies by. There are so many showstoppers and the cast is so uniformly good that it’s almost impossible to single anyone out.

But just a few highlights: Bird offers a lovely “Reaching for the Moon” cut from Berlin’s first film in 1930, and returns late with other nicely vocalized ballads. Attmore and Benton have an exciting go at Ethel Merman’s “My Walking Stick” from “Alexander’s Ragtime Band.” Medeiros and Bird lead the company in the wittily choreographed “Back to Back” from “Second Fiddle.” Moore scores with a lovely “Isn’t This a Lovely Day?” and pairs winningly with clarion-voiced Attmore for “The Piccolino.” Davidson and Benton beautifully handle the revue’s title song “Cheek to Cheek’ with Davidson delivers a touching solo, “ Love, You Didn’t Do Right By Me,” and Benton offering a heartfelt “I’ve Got Plenty to Be Thankful For.” Medeiros makes several bespectacled appearances as Berlin and has a nice solo moment with the Oscar-nominated “Change Partners.”

Expert book writer Barry Kleinbort ties the numbers together with just enough interesting narrative to tell Berlin’s story in unhackneyed fashion. Never bogging down the musical proceedings, he peppers the script with interesting facts such as Berlin’s negotiating control of how his songs were used, a percentage of the gross, and eventually title billing as he went from United Artists to RKO to Fox to MGM, and so on, and lightly touching on personal matters such as Berlin’s devotion to family and his bouts of depression. 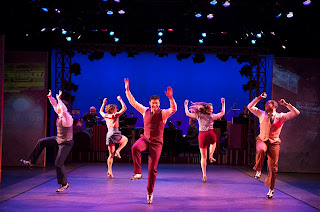 The show plays out beautifully on the St. Jean’s stage, roomier than the York’s regular venue at St. Peter’s which is currently being restored after a major flood. York Artistic Director James Morgan has designed an attractive paneled set, lighted by Jason Kantrowitz, allowing for historic projections while the six band members, including Music Director David Hancock Turner, sounding quite wonderful, have a spacious performing space upstage.

Nicole Wee’s costume designs are attractive and danceable, and the unobtrusively satisfying sound design is by Julian Evans.

Print this post
Posted by Harry Forbes at 10:13 AM