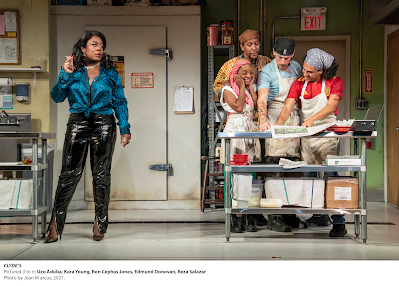 The dominant and most worthy message which you take away from “Clyde’s” is that everyone deserves a second chance. The play is Lynn Nottage’s hilarious, warm hearted, and deeply moving tale about a Pennsylvania truck stop diner run by a no-nonsense, imperious lady named Clyde who’s done jail time for an unspecified but undoubtedly violent crime. She is ferociously embodied by the remarkable Uzo Aduba.

The play had its premiere in 2019 at the Guthrie Theater.

Clyde’s kitchen staff is made up of other ex-convicts, who take fervent pride in the diner’s specialty sandwiches and who, under the leadership of the sage-like Montrellous (Ron Cephas Jones), endeavor to create their own perfect sandwich. There’s feisty Letitia (Kara Young), a single mom who stole from a pharmacy for her baby’s needed medicine, but also lifted some opioids while at it; Rafael (Reza Salazar) who held up a bank with a BB gun to buy his girlfriend a Cavalier King Charles Spaniel; and newcomer Jason (Edmund Donovan), the only white worker, and a carryover from Nottage’s “Sweat,” who, in a drunken rage at losing his job, attacked someone with a bat.

Tish and Raf are reluctant to accept the racist-tattooed Jason as part of the team, and he’s slow to take the same sort of pride in his work, but inevitably, he makes a turnaround. Montrellous’ backstory doesn’t come out till late in the play, but when it does, it’s a fitting revelation for such a saintly character.

It’s been suggested that Clyde is some sort of Satanic character -- and indeed there are some surprising bursts of hellish flame at times when she’s onstage -- but it seems to me that gruff as she is (“I don’t do pity,” she declares at one point), her autocratic rule of the kitchen is an extreme form of tough love. Still, she resolutely refuses Montrellous’s tempting offers to taste his divinely inspired sandwiches, as if doing so would weaken her hardened shell.

Nottage has already proven her impressive expertise in plays like “Ruined” and “Sweat” but “Clyde’s” demonstrates that she’s a master of comedy as well. Her dialogue really crackles. And for all the genuine humor, she never loses sight of the serious underlying theme. Her characters would not be out of place in a Eugene O’Neill play, and they are no less skillfully drawn, and gorgeously acted by everyone here.

We’ve seen food as a metaphor for redemption before, but it’s an ever appealing theme and when Montrellous tells Tish to put the love for her daughter into a sandwich, it touches the heart.

Takeshi Kata’s working kitchen set is a marvel, and lighting designer Christopher Akerlind and sound designer Justin Ellington have a ball with those fantastical moments when the crew describes their ideal sandwiches in mouthwatering detail. Jennifer Moeller has designed a hilarious series of skintight outfits for the plus size Aduba whose every entrance brings a more outrageous getup.

The whole has been masterfully directed by frequent Nottage collaborator Kate Whoriskey.

Second Stage has admirably collaborated with various partner groups for weekly thematically related talkbacks with their staff and community members, criminal justice reform advocates, and people with lived experience of incarceration and the criminal justice system.

The final two weeks of the run will be live simulcast starting January 4, and is definitely worth your while if you can’t make it live to the Hayes Theater.

Print this post
Posted by Harry Forbes at 4:48 PM