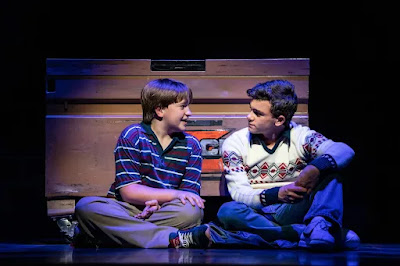 Book writer and lyricist Dan Collins and composer Julianne Wick Davis have taken the story of a 13-year-old boy with a Diana Ross obsession coming to terms with his sexuality, and capably fleshed it out while remaining true to its source material.

The time is 1981. Trevor knows he’s somehow different, though the term “gay” isn’t used as overtly as in the film. But his love of show tunes, dancing, and Diana Ross have definitely branded him as “weird.”

The Ross hits heard on the soundtrack of the film now are performed as a fantasy version of the lady herself by Yasmeen Sulieman. She makes appearances throughout the show in young Trevor's imagination. All the big hits are heard, at least in part, from “Endless Love” to “I’m Coming Out.”

Trevor's love of musicals afforded Collins and Davis further musical opportunities. In the film, there was merely a brief scene of Trevor rehearsing the school’s play club with the song “Anything Goes.”

Here Trevor is able to convince the junior high football team to let him choreograph a real showbiz number with hats and canes (“One/Two”) for the annual talent show, rather than the team’s traditional goofy appearance in tutus. The team’s popular player Pinky (Sammy Dell) has improbably taken Trevor under wing, unaware that Trevor is developing a crush on him, and persuaded his mates that they should cooperate.

Meanwhile, schoolmate Cathy (Alyssa Emily Marvin) is hopelessly enamored of the uninterested Trevor, while his friend Walter (Aryan Simhadri) is deeply smitten with Cathy. And then there’s Trevor’s friend Frannie (Isabel Medina) who, in turn, has a crush on Pinky. Wanting to be perceived as “normal,” Trevor decides to take Cathy to the Quality Courts, a local makeout place, on a date night with predictably unsatisfying results for the lovelorn girl.

All along, Trevor keeps a diary in which he reveals his feelings about Pinky. When it falls into the wrong hands, Trevor becomes the target of cruel bullying, especially by Jason (Diego Lucano) and Mary (Echo Deva Piconi). The circumstances of the diary coming to light are rather more dramatic here than in the film wherein the parents just happen to find it, and forthwith set him up for a talk with the local priest.

The score is only pleasantly serviceable but at least in a comfortably traditional mode as opposed to the generic pop sound of so many shows today.

Trevor is played by a remarkable 13-year-old named Holden William Hagelberger with a sweet disposition and boundless energy as he’s onstage almost every moment. The kids are, in fact, all excellent, and well directed by Marc Bruni (“Beautiful: The Carole King Musical” and many others). Sally Wilfert and Jarrod Zimmerman are good as his mostly clueless but well meaning parents, with Zimmerman even doubling as the priest. And Aaron Alcaraz scores as an empathetic hospital worker who enters the story towards the end.

Choreographer Josh Prince, who collaborated with Bruni on “Beautiful” has designed some clever production numbers such as the aforementioned “One/Two” and Trevor’s funeral fantasy that opens the second act (“Your Life is Over”).

Donyale Werle’s scenic design encompassing various locals including the school and Trevor’s home (brightly lit by Peter Kaczorowski), and Mara Blumenfeld’s flashy costumes all look spiffy at the spacious, almost Broadway-size Stage 42 theater. (I hadn’t been there in a while, and it was good to see those wonderful posters and photos of historic Shubert productions still adorning the public spaces there as they did when the venue originally opened as The Little Shubert.)

But a commendable ancillary benefit to “Trevor” is that it may raise youngsters’ awareness of The Trevor Project which was created after the film with a mission of ending suicide among lesbian, gay, bisexual, transgender, queer  & questioning young people.

Print this post
Posted by Harry Forbes at 6:14 AM