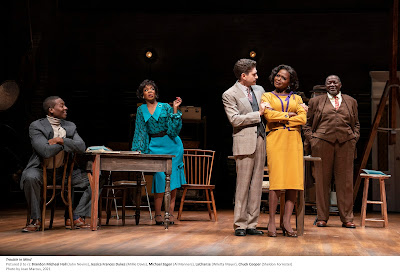 The revival of African American writer/actress Alice Childress’ 1955 Obie-winning Off-Broadway play receives its long awaited and welcome Broadway debut courtesy of the Roundabout. The play had been slated for Broadway in 1957 with a new title “So Early Monday Morning,” but one of the producers wanted the ending changed (i.e. allegedly softened for white sensibilities) and Childress, after several attempts at rewriting, finally decided to withdraw the play.

As a result, Lorraine Hansbury’s “A Raisin in the Sun” would have the distinction of being the first play by a female African-American playwright on Broadway.

The work concerns a multi-racial cast mounting an anti-lynching play called “Chaos in Belleville.” We observe through the course of rehearsals the inherent racism of Al Manners (Michael Zegen), the well-intentioned but dictatorial and condescending Hollywood director making his Broadway debut. Wiletta Mayer (LaChanze), a veteran of many “Mammy” roles, is hired to play the mother of the lynching victim in the play-within-the-play.

As rehearsals progress, Wiletta’s dissatisfaction with how the play is written and directed comes increasingly to the fore, leading to her powerful outburst in the second act which is the play’s highlight.

The other black characters in the play are the sassy Millie (Jesica Frances Dukes), veteran Sheldon (Chuck Cooper), and relative novice John (Brandon Micheal Hall). In an early scene, Wiletta gives John a primer on how to act around white people in the theater (e.g. laugh at their unfunny jokes, reveal nothing about one’s education, etc.). In Childress’ nuanced writing, it’s interesting that Wiletta’s increasing concerns about the play they are rehearsing are not openly shared by the more passive others. 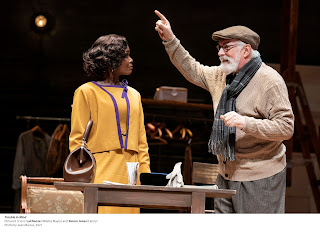 Given the play’s history and themes, it certainly couldn’t be more relevant to today’s Black Lives Matter and #MeToo environment, though, in fact, the Negro Ensemble Company did it in 1998. And there have been regional productions in recent times, among them: Yale Repertory Theatre, Baltimore’s CenterStage, and Arena Stage, all about a decade ago. Just this year, the play was mounted at the Shaw Festival in Canada, and another production began a limited run at London’s National Theatre this month.

Under the knowing direction of Charles Randolph Wright, performances are all fine here, though I might have preferred an older actor to play Manners, good as Zegen is.  LaChanze has scored strongly in many dramatic musicals from her Tony-winning role in “The Color Purple” onwards, but this is her biggest non-singing role, and she’s the bright, charismatic center. (In the interest of full disclosure, she does get a brief chance to vocalize.)

Cooper has a particularly strong moment as he recounts witnessing a real-life lynching as a child, though after doing a little research, I was surprised to learn the original lynching monologue was delivered by Millie. But Cooper does it superbly.

For all the production’s excellence, I couldn’t help  but feel the history of the play and its relevant thematic material are actually more intriguing than the play itself which has some static patches. And I didn’t quite buy the silent movie melodramatics of what we see of “Chaos in Belleville.” Would those scenes really have been played so broadly as late as 1955? Wiletta’s principal objection to the scene is having her mother character urge her son to give himself up when that action would mean almost certain death for him. That’s a valid point, but her argument would have been just as cogent without the histrionics.

Still, perhaps that’s the way it was meant to be played. And certainly the ensuing conflict between Manners and Wiletta is a powerful one as when the former rebuts her arguments with “The American public is not ready to see you the way you want to be seen because, one, they don’t believe it; two, they don’t want to believe it; and three, they’re convinced they’re superior.”

Print this post
Posted by Harry Forbes at 1:21 PM