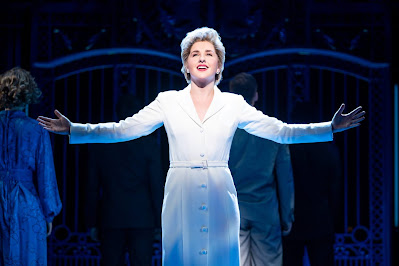 No, “Diana, The Musical” is not as bad nor as risible as you may have heard. And if you saw the musical on Netflix and were unimpressed, I can attest that it’s several notches more enjoyable seeing it live. That all may be faint praise for a show that is so mediocre, predictable, and above all, unnecessary. It is also, by its very nature, exploitative but the titular lady is at least sympathetically portrayed.

Fans of “The Crown” will certainly have a strong sense of deja vu as the musical -- well, at least the first act -- follows the trajectory of the series (also Netflix) pretty closely. As with the Diana Spencer plotline on the series, the musical at hand is anchored by a strong and sympathetic portrayal of the Princess of Wales by its leading actress.

Jeanna De Waal makes a more than plausible Diana and one is able to comfortably suspend disbelief throughout. She is, in fact, the production’s strongest asset, and probably an awards contender if negativity about the show itself doesn’t prevail. The second outstanding asset are William Ivey Long’s spot-on costumes which repeatedly win approval from the audience as the endless parade of outfits conjure up the lady’s iconic look so vividly. (There are also some quick-silver costume changes, too, which earn plaudits from the crowd for their ingenuity.) The first act finale, “Pretty, Pretty Girl” is more or less a fashion show. (Paul Huntley’s hair design deserves a nod, too.)

Third pride of place goes to the ever-terrific Judy Kaye, despite being saddled with a shallowly written portrait of Queen Elizabeth. Rather more entertainingly, she doubles as an unbilled Barbara Cartland, Diana’s step-grandmother, to whom's romantic novels the young Diana was apparently enamored.

Also quite decent (with the material they’ve been handed) are Roe Hartrampf as a handsomer-than--life Prince Charles and Erin Davie as his paramour Camilla, whom Joe DiPietro’s book stops short of branding an out-and-out villain. Still, when Diana begins to fight back and get some of her own, the audience responds with gleeful delight.

DiPietro’s book,  though never less than efficient, takes some peculiar tonal shifts: sometimes as serious as “The Crown,” other times, oddly spoofy. The titular lady is painted respectably in a way that would probably please William and Harry. (Her easy way with the common folk, and her courageous stance with AIDS patients are touchingly portrayed.)

But a late-in-the-show number about the provocative dress Diana will wear in a moment of one-upmanship with Camilla includes a vulgar lyric, later reprised by the Queen, that rings false, amusing though it may be.

I was a fan of “Memphis” by the same team, but on this occasion, David Bryan’s music strikes me as unremarkably generic and could certainly use more variety. His lyrics, co-written with DiPietro, are simplistic in the extreme, but carry the story along. The structure of the piece is not unlike “Evita” with the ensemble serving to advance the narrative. But oh, how much more clever and astute Tim Rice’s lyrics seem in retrospect!

The book ends on a fairly optimistic note as Diana splits from Charles with, more or less, the Queen’s blessing, to begin a new life for herself. A little narrative exposition alludes to her tragic end in Paris, but none of those terrible events are dramatized. The show ends, as it began, with a blinding barrage of paparazzi flashbulbs in Natasha Katz’s lighting design. David Zinn’s scenic design covers all the obvious locales with a streamlined economy.

In fairness, the audience seemed to have a good time, and that included a handful of other critics around me. “Wasn’t that fun?” I heard one remark while exiting the theater. And indeed it can be if approached in the right frame of mind. Others might decry the sad state of today’s musical theater, and they wouldn’t be wrong either.

Print this post
Posted by Harry Forbes at 6:58 AM