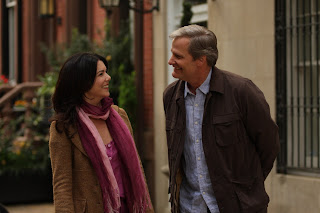 From the unlikely confluence of a trendsetting inspirational author, a single mom chiropractor, a recovering alcoholic bookstore owner, and a star-struck mailman, comes this perfectly delightful romantic comedy.

Jeff Daniels, who’s become a master of quirky, oddball parts, is Arlen Faber, author two decades earlier of “Me and God,” a best-seller that has spawned a cottage industry of endless tie-ins. But Arlen is no PBS spotlight-hounding celebrity. Rather, he’s a reclusive curmudgeon who steers clear of a voracious public eager to know more about the man who allegedly has a pipeline to the Almighty.

Apart from his misanthropy, Arlen feels like a fraud. How “real” was the conversation with God which spawned the book? He stops into a church hoping to receive a divine message, but leaves empty-handed.

When his chronic back ailment renders him a helpless invalid on his Philadelphia townhouse floor, he must literally crawl through the busy streets until he reaches the “Straighten Up” Healing Center. Under the healing hands of warm-hearted owner Elizabeth, played most sympathetically by Lauren Graham, Arlen regains his upright posture and his humanity as it is love at first sight.

Elizabeth’s awestruck assistant Anne (Olivia Thirlby) recognizes Arlen’s name instantly, unlike Elizabeth who has never heard of him. Later when she reads his book, though, she finds she connects with him on a profound level.

They tentatively begin dating, and Arlen eventually takes a paternal interest in Elizabeth’s cute seven-year-old boy whose father abandoned them years before.

Meanwhile, Kris, fresh from rehab, and unhappily coping with alcoholic father with whom he longs to reform, is struggling to make ends meet at the bookstore he runs with his assistant Dahlia (Kat Dennings). When Arlen tries to sell Kris the multitudinous volumes of New Age tripe that comes over his transom, Kris refuses, only finally agreeing to take the books if Arlen will counsel him. In the process, we learn that Arlen had father issues as well. Kris is played with hangdog appeal by Lou Taylor Pucci.

There’s also the wide-eyed mailman, played by Tony Hale, who’s asked for the route just so he can catch a glimpse of the famous man, though Arlen tries to accept all his mail incognito

Eventually, these plot lines intersect, in a predictable way that only hardened cynics will fail to find genuinely heartwarming.

Daniels and Graham – recently concurrently on Broadway in “God of Carnage” and “Guys and Dolls” respectively -- make a most appealing team, with Daniels demonstrating great flair for physical comedy. They, like all the characters, undergo redemptive transformations by the film’s end, each overcoming their particular fears. It’s a pleasure to watch Daniels’ crustiness depart and Graham shake off her phobic over-protectiveness of her boy.

First time director John Hindman, a former standup comic, also wrote the clever script, which, like his well-paced direction, evinces a playful whimsy. Just once or twice, the script sounds a false note -- generally when the characters are at loggerheads – but, on the whole, this is a beguiling little gem of a film.

(Rated R for language) Print this post
Posted by Harry Forbes at 6:58 AM