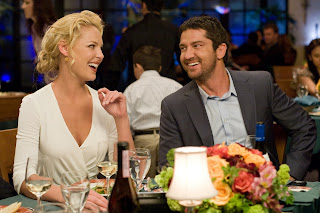 It’s no small credit to the charms of Katherine Heigl that – saddled with a script as frequently vulgar as the one provided here by Nicole Eastman, Karen McCullah Lutz and Kirsten Smith – she can utter a crude term for the male member multiple times in succession and sound as innocent as Doris Day at her onscreen purest.

In fact, in its playfulness and breezy tone – if not exactly wit and good taste – director Robert Luketic’s romantic comedy has much the spirit of such Day-Rock Hudson pairings as “Pillow Talk” and “Lover Come Back.”

But Heigl and co-star Gerard Butler’s charisma and natural rapport go a long way towards making this featherweight, not consistently funny but genuinely romantic, film watchable. With a more tasteful script, they might even be within hailing distance of Day and Hudson, and maybe even Hepburn and Tracy. Yes, they’re that good.

In these less elevated circumstances than those Hollywood Golden Age stars ever had to endure, however, Heigl is Abby Richter, the producer of a Sacramento morning TV show, and Butler is Mike Chadway, the boorish host of a dubious cable access program, “The Ugly Truth.”

What’ is “the ugly truth”? Men care for nothing but sex. Women who think it’s all above love are hopeless romantics.

To boost their sagging ratings, Abby’s boss hires Mike to do his chauvinistic shtick on the “A.M. Sacramento,” much to Abby’s chagrin, and of course, ratings soar.

When Abby falls for Colin (Eric Winter), the hunky single doctor next door, Mike – in Cyrano de Bergerac fashion -- offers Abby step-by-step advice on how to win him. The coaching works, but in the process, Mike and Abby find they like each other’s company more than they’re willing to admit. Of course, despite Mike’s crudeness, we learn early on that he’s really a decent, family guy with a sister and young nephew living next door.

Cheryl Hines and John Michael Higgins provide some bright moments as they husband and wife anchor team who take Mike’s blunt advice about their love life to heart, right on air.

Heigl looks smashing throughout and keeps her dignity even when – in what is arguably the film’s comic high point – Abby leaves her house without having time to remove the, um, vibrating panties Mike had sent her earlier, and a youngster gets hold of the remote control while she’s trying to give a presentation to the station’s corporate sponsors at a posh restaurant.

The versatile Butler – who again shows an easy flair for light comedy – matches Heigl on the likability scale.

We’ll say this: for a movie about a piggish anti-hero who changes his ways when he finds true love, “The Ugly Truth” beats the Matthew McConaughey starrer, “Ghosts of Girlfriends Past,” released earlier this year, by a mile.