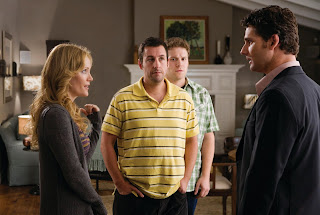 You’d be forgiven for thinking the latest comedy from Judd Apatow, especially bearing a title like “Funny People,” might be purely a barrel of laughs. But despite the presence of funnyman Adam Sandler (Apatow’s roommate from early days) and the usual Apatow repertory company (Seth Rogan, Leslie Mann, Jonah Hill, etc.), this is, in fact, the writer-director’s most serious film to date for he’s taken on no less a subject than mortality.

Sandler is George Simmons, a comic movie star playing silly roles not unlike some of those essayed by Sandler himself, living in affluent loneliness in a sprawling Malibu mansion. After he learns he has a rare and fatal form of leukemia, he decides to return to his roots as a stand-up comic. When he observes up-and-coming Ira Wright (Seth Rogan) gamely trying out his material at Los Angeles’s Improv Comedy Club, George offers him a gig as a joke writer and personal assistant.

This is quite a boon to Ira who rooms with his buddies Mark (Jason Schwartzman, who also wrote the score) and Leo (Hill), both further along in their careers than he. Mark gets a hefty paycheck (which he lords over his pals) from his role on a middling TV series, and sardonic Leo initially demonstrates more flair for stand-up than Ira who toils by day in a mall deli.

George confides the details of his physical state to Ira who eventually persuades him to share the too-much-to-bear-alone news with others. This comes to include former fiancée Laura (Leslie Mann), now unhappily married to philandering Aussie Clarke (Eric Bana playing his role for laughs) with two young daughters. (Mann is Mrs. Judd Apatow and the girls are played by their daughters, very cute Maude Apatow and Iris Apatow.)

The Laura sequences, which take up the latter part of the film, take the film, rather jarringly, on a completely different trajectory than the earlier parts, but ultimately give the loose narrative structure more cohesion.

Sandler offers his finest dramatic performance yet, though he pulls no punches with the less likable aspects of his self-centered, self-pitying character, yet shows real anguish as he grapples with his death sentence and endures the nasty side-effects of chemo. Rogan makes a terrific foil, morphing from awestruck idolatry to a caring, if hesitant, friend.

When, for instance, Ira learns that Mark has slept with Daisy (newcomer Aubrey Plaza), the dour, bespectacled comedienne with whom he hopes to score, he’s disconsolate, even though he and Daisy have yet to actually go on a date. Laura thinks she’s miserable in her marriage, but perhaps rekindling the long dreamt-of romance with George is not what she imagines.

So despite the numerous penis jokes and distinctly blue humor throughout (especially in the stand-up sequences), it’s the human relationships you remember: the well-played camaraderie of the roommates, George’s anguish and solitude, the rekindling of his romance with Laura, and so on.

The film is a tad long at 140 minutes, and takes its sweet time. But these characters feel like real people, and the bittersweet mix of funny and sad ultimately works. Despite some missteps, “Funny People” stays with you, and registers as intelligent filmmaking despite the often childish behavior of its protagonists.

(Rated R for language and crude sexual humor throughout, and some sexuality.) Print this post
Posted by Harry Forbes at 9:26 AM