Hell Is a City (at New York’s Film Forum) 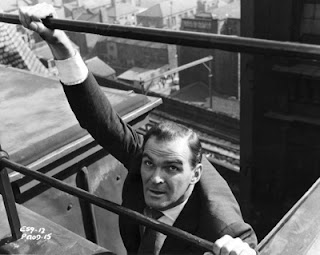 This is but one title from what looks to be a fascinating lineup of film noir from the U.K., dubbed “Brit Noir.”

The series runs at the Film Forum August 7 – September 3, and features 42 movies in all, starting with Carol Reed’s classic, “The Third Man,” and capped by a two-week run of another Reed evergreen, “Odd Man Out.”

“Hell is a City” from 1959 shows on August 12, and stars Stanley Baker as Manchester detective Harry Martineau doggedly on the trail of hard-as-nails jewel thief Don Starling (played well but rather incongruously by American John Crawford) and his gang. It’s a solid and, for its time, gritty film shot in widescreen black and white with a jazzy score by Stanley Black.

When the secretary of a bookie Gus Hawkins (Donald Pleasence) is robbed and afterwards accidentally killed by Starling, the stakes are raised to find the dangerous criminal who, we learn, had gone to school with Martineau. It climaxes with a terrific rooftop chase and fight.

Along the way, Martineau – in a loveless marriage with a frosty neglected wife (Maxine Audley) – encounters aging barmaid Lucky (Vanda Godsell), a former flame of Starling whom Martineau suspects Starling may have contacted. She herself has a yen for Martineau (“All’s fair when there’s no children,” she coos seductively).

There’s also the sluttish Chloe, Hawkins’ wife, played by a young Billie Whitelaw, whom Martineau describes to his assistant, by way of warning, as a “man-eater.” She, too, was once involved with ladies man Starling. There’s a pretty deaf girl named Silver (Sarah Branch), who shares a tense scene with Starling when she catches him rummaging through the house she shares with her old grandfather.

The film is tautly directed (and co-written) by Val Guest from a novel by Maurice Proctor, and atmospherically shot in black and white by Arthur Grant.

The violence is surprisingly strong for its period, and there’s even and implied rape when Starling confronts Chloe alone in her home, rips off her blouse, and drags her off camera.

Baker is particularly fine, resembling a more square-jawed Sean Connery, but there’s good supporting work all around, though the performances of Audley and Godsell are very much of their time.

Other films in this promising series include rarities “They Drive by Night,” “Obsession,” “The Green Cockatoo,” “The Good Die Young,” and “The October Man.” The series includes a tribute to James Mason, several of whose early films fit the noir genre.