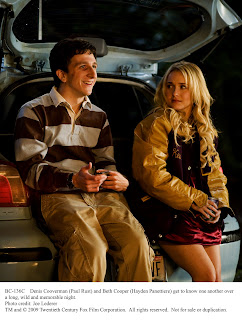 Despite some borderline touching moments, the teen comedy “I Love You, Beth Cooper” is mostly vulgar, crude, and as if that weren’t enough, not in the least bit funny. The film was adapted by Larry Doyle from his novel, and the title refers to Buffalo Grove High valedictorian Denis Cooverman’s (Paul Rust) commencement speech in which – to the consternation of his parents and the faculty -- he stammers out his love for the titular blonde cheerleader (Hayden Panettiere) on whom he’s long had a silent crush.
Egged on to this public declaration by best buddy Rich (Jack T. Carpenter), Denis uses the opportunity to psychoanalyze several of his classmates including Rich, a flamboyant film buff whom Denis “outs” as gay. (Rich spends the rest of the film vociferously denying the label.)
For her part, Beth is rather charmed by Denis’ declaration, and she and her two girlfriends – Cammy (Lauren London) and Treece (Lauren Storm) -- agree to go to Denis’s graduation “party" (guest list, apart from Rich, zilch). When her macho military boyfriend, Kevin (Shawn Roberts), bursts into the house with his two goon buddies, and pummels his girl’s would-be suitor, Beth comes to the rescue, and the remainder of the film finds them fleeing the bullies, and bonding in the process.
In the midst of all this thuddingly unfunny mayhem, Denis learns that Beth is not quite the pure goddess he imagined, and Beth reveals the low self-esteem beneath the brash exterior, and warms to Denis’s genuine love.
For a PG-13 flick, the language, sex, and violence (albeit of the slapstick kind) are fairly strong.
Panettiere is good as the flashy but inwardly vulnerable object of Denis’s affection ultimately humbly aware of her shortcomings, and Rust –- a dorky Romeo with an Adrian Brody proboscis -- manages to be endearing.
Would that the pair were in another coming-of-age film, but as it is, Doyle's script lets them down repeatedly. Awkward silences, obvious punch lines and tasteless gags fall flat time and again.
The film is said to mark director Chris (“Home Alone,” “Mrs. Doubtfire”) Columbus’ return to comedy. We’re afraid this isn’t it. Print this post
Posted by Harry Forbes at 5:00 AM