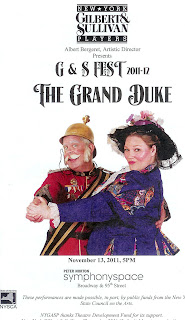 For its annual one-night-only event – often a G&S or Sullivan-only rarity – NYGASP, under the direction of Albert Bergeret – resurrected G&S’s final operetta, a critical and popular flop in 1896, and not performed again by the D’Oyly Carte Opera Company till 1975.

Under the circumstances, NYGASP’s staging was remarkably polished and full, including some delightful choreography by David Auxier (who also co-directed with Bergeret, and took the small but significant part of the Herald who brings on the Prince of Monte Carlo near the end).

Bergeret’s conducting – brisk, buoyant and graceful throughout – ensured a high musical tone, one matched by a uniformly superb cast. The concerted numbers – “Strange the Views Some People Hold” and “Now Take a Card,” to name two – were gorgeously vocalized.

All in all, Sullivan was, in fact, more faithfully served than librettist Gilbert some of whose lyrics were rewritten, albeit not egregiously. The music proved a constant delight to the ear, because even though near the end of his life and in poor health, Sullivan came up with one beguiling tune after another.

Gilbert’s libretto – an unfocused story about a theatrical troupe in a German Duchy who plot to overthrow a penny-pinching Grand Duke (the redoubtable Stephen O’Brien) and govern along theatrical lines, actually achieving that end through a game of cards (don’t ask) – lacks the sharp focus of Gilbert’s earlier work, but even so, the situation is never less than amusing.

Richard Holmes essayed the role of company comedian Ludwig who takes the Duke’s place, and learns that duty dictates his abandoning his sweetheart Lisa (Melissa Attebury) for a succession of ladies with claims to the status of Grand Duchess, including the troupe’s leading lady Julia (Charlotte Detrick), the battleaxe Bareness von Krakenfeldt (Angela Christine Smith), and finally the Princess of Monte Carlo (Sarah Caldwell Smith).

As usual, Holmes’ mellifluous tone, incisive diction, and assured stage presence made for a cherishable performance.

Daniel Greenwood as theatrical manager Ernest and Detrick brought just the right comic flair to their roles, the latter having a ball with her incongruous (for an “English” actress) German accent, and were vocally strong.

Attebury’s Lisa was exquisitely sung, and her second act lament, “Take Care of Him,” was especially lovely, garnering one of the biggest hands of the evening. As, later, did Quinto Ott as The Prince of Monte Carlo whose dazzling Roulette number, sung with firm tone and appropriate panache, brought down the house.

The purist in me didn’t care for Julia’s showpiece aria “So Ends My Dream” turned into a duet for her and Lisa, but – as both were abandoned by Ludwig at this point – it made some dramatic sense, and gave us another opportunity to hear Attebury. Also right on target was James Mills as the Notary who sang with style and fine musicianship throughout.

The performance was unobtrusively miked, the sound emanating from the stage cleanly and naturally.

The edits and revisions notwithstanding, the performance was faithful in most particulars and made a good case for the piece’s reclamation. Of all the “Grand Duke” revivals I’ve seen in town over the years by our enterprising operetta companies – including NYGASP themselves – Sunday’s performance was among the most persuasive.