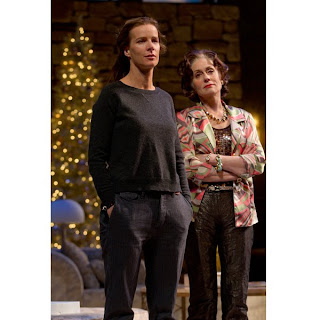 Much as I enjoyed Jon Robin Baitz’s much heralded play when it opened at the Mitzi Newhouse last year for its snappy one-liners and superlative performances (by Stockard Channing, Stacy Keach, Linda Lavin, Elizabeth Marvel, and Thomas Sadoski), I felt the whole was rather less than its excellent parts.

The dilemma of a daughter, a promising novelist, now divorced, and recovered from emotional problems, who returns to the California home of her staunchly Republican parents – should she or shouldn’t she publish a memoir about her late brother’s suicide that will hurt them? – seemed rather inconsequential, and the dialogue smart but overly glib.

But now on Broadway, where John Lee Beatty’s set looks just as spiffy on a proscenium stage, with Judith Light and Rachel Griffiths in the Lavin and Marvel roles, lines are delivered in a far more naturalistic, less sitcom manner, and the whole – under Joe Mantello’s sensitive direction – seems more persuasive on every level.

The returning cast members have settled into their parts most admirably. Comparisons are famously odious, but I’ll take the plunge and say that Light is every bit the equal of Lavin, as she follows her acerbic part in “Lombardi” with another sharp portrayal, and Griffiths is far more affecting than Marvel.

Griffiths seems more naturally suited to the part, and she gives a fine and touching portrayal that transcends her quality, but sometimes mannered, TV work (e.g. “Six Feet Under,” “Brothers and Sisters”). Her final moments are especially moving.

Now’s the time to see “Other Desert Cities.” If you saw it uptown, I think you’ll find a return visit most rewarding.