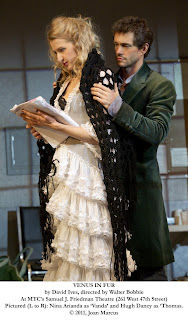 I missed Nina Arianda in her much praised performance in this play last year Off-Broadway at the Classic Stage Company. But now, after making an auspicious Broadway debut in “Born Yesterday,” she has returned to the role that first brought her attention, one that allows her to demonstrate even far greater range.

She’s a loopy, classless actress trying out for a part in a play based on Leopold von Sacher-Masoch’s 1870 novel “Venus in Fur,” about a nobleman who allows a lady named Vanda (significantly, Arianda’s character has the same name) to dominate him for sexual pleasure. (The word masochism derives from the author’s name.)

Hugh Dancy plays David, the harried playwright/director who’s adapted the novel. She arrives in a rainstorm for the audition late and frazzled, but before long, she’s persuaded him – by a combination of her forceful personality and manipulative cajoling – to read the nobleman’s part in the script (which, by the way, allows Dancy to revert to his natural English accent).

And, for the duration of the intermissionless play, they go through a series of kinky role-playing as they act out Sacher-Masoch’s story, every so often departing from the play and speaking of their actual situation which, of course, mirrors the the situation in the 19th century narrative.

Arianda is so mercurial and dazzling to watch that it almost doesn’t matter that David Ives’ play, though cleverly conceived, becomes awfully talky as it morphs from comic romp to something considerably darker, though director Walter Bobbie masterfully orchestrates the transitions.

This is not a one-woman show, however, as Dancy expertly matches Vanda’s quicksilver mood and character shifting with a most accomplished performance.