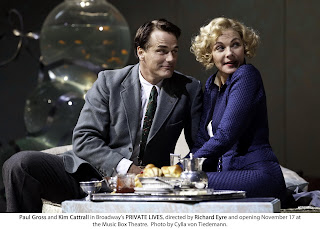 Kim Cattrall proves the real deal in Noel Coward’s classic “Private Lives.” As the mercurial, witty Amanda, there’s nary a trace of the “Sex and the City” Samantha on display. Her assumption of the role is, in fact, the latest in a string of latter-day performances that have seen the actress stretching with a number of versatile roles, from Polanski’s “The Ghost Writer” to “My Boy Jack” on PBS’s “Masterpiece Classic” to her recent stint as Shakespeare’s Cleopatra in the U.K.

Cattrall received praise for Richard Eyre’s production of Coward's play in London last year, opposite Matthew MacFadyen as Elyot. Here, she’s joined by the wonderful Paul Gross, star of “Slings and Arrows,” that superb mini-series about a Canadian Shakespeare festival, not unlike Stratford, which you can still catch on the Sundance Channel.

As the formerly married couple who meet in Deauville on their respective honeymoons to other people – the stuffy Victor (Simon Paisley Day) and the simpering Sybil (Anna Madeley) -- they play with great style, tossing off their barbed lines with crisp British aplomb in a way that honors the roles’ originators, Coward himself and Gertrude Lawrence, with the overlay of their own considerable personalities.

The first act is set on the traditional double balcony – though those early scenes are marred by “off-stage” music far too intrusive and not appropriately directional. The actors shouldn’t have to compete with what should only be distant ambient scene-setting. The music, of course, eventually leads into Amanda and Elyot’s sentimental favorite, “Someday I’ll Find You,” vocalized most charmingly by Cattrall and Gross.

They are far from the whole show, however, as Day and Madeley are quite wonderful in their supporting roles, both showing their mettle in the third act, after Victor and Sybil come in upon their squabbling mates who have fled to Amanda’s Paris apartment, designed – like the period-perfect costumes -- by Rob Howell in witty Art Deco fashion. But though highly fanciful, the spacious layout gives the stars ample room for the considerable slapstick of the second act, which Cattrall and Gross enact adroitly.

What makes Eyre’s production so special is the sensitivity to the serious subtext beneath the witty banter: those significant pauses and silences, the casual references to death, belief, afterlife, love, attraction, and fidelity. The seemingly idle banter of much of Coward’s dialogue belies the comedy’s true substance. One is reminded anew how human and natural is the dialogue with its quicksilver shifts from light to shade.

This is, if anyone need be reminded, a great play, and it’s happily been accorded an ace production.