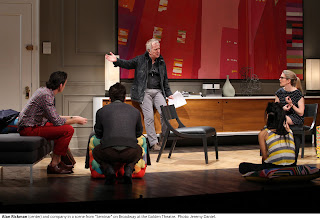 If “Seminar” offered nothing more than a chance to see Alan Rickman at his most sneeringly, witheringly sarcastic, that would probably be enough for the audience that cheers his entrance, and laps up every subsequent scene. He’s Leonard, a famous fiction writer, hired for a cool $5,000 each by four aspiring young novelists, to coach them over a period of 10 weeks.

His feedback as they tremblingly offer him a few pages of what they’ve written is anything for paternal, and he – like everyone else in this play – seems to be able to assess the quality of prose by the merest glance. But we’ll forgive playwright Theresa Rebeck this bit of dramatic license.

The well-heeled Kate – whose spacious 10-room rent controlled apartment is setting – gets the worst of Leonard, as he harshly laces into the story it’s taken her six years to write. She’s played by Lily Rabe in a sardonic, New York style eons removed from her much-praised Portia in the Al Pacino “Merchant of Venice.”

Jerry O’Connell (in his Broadway debut) is Douglas, the cockiest member of the group about to be published (though Leonard decrees his writing is perfect “in a whorish way”); Hettienne Parr is the sexy Izzy (she uninhibitedly bares her breasts early on) with a tougher skin than Kate, but with the more pragmatic outlook; and Hamish Linklater is Martin, the most insecure, and the one most reluctant to hand over any of his precious prose for Leonard’s exacting, no-holds-barred inspection. Literary matters aside, love and sex enter the picture, but I shan’t spoil what the pairings.

Rebeck has written five juicy parts, and they all rise to the occasion, under Sam Gold’s smart direction.

The play is far from profound, and more than a little implausible, though there are some astute observations on the writing process and the realities of the publishing world, and certainly, the Rebeck's setup holds your attention, with a good number of laughs. When matters take a more serious turn, we go along with the mood shift

Rickman has a long revelatory speech that he delivers with understated power. I found his projection a little understated, too, for much of the evening (perhaps the result of an acute respiratory infection that felled him earlier in the week), but in every other respect, he was at the top his game here.

David Zinn’s striking set design for Kate’s apartment defines Kate to a tee, and gives way to a striking scene change when you least expect it, lighting designer Ben Stanton’s bright illumination morphing to something more atmospheric in kind.