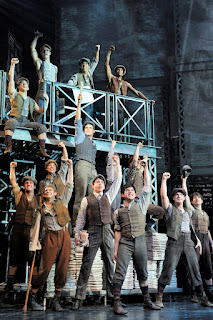 After the rash of mostly positive reviews at the Paper Mill Playhouse for this nothing-if-not-energetic stage adaptation of the 1992 film about an 1899 strike by newsboys against the unjust working conditions imposed by the papers’ publishers, personified here by Joseph Pulitzer, a Broadway transfer seemed inevitable, and so it was.

Thanks to the premature closing of “Bonnie and Clyde,” heralded star Jeremy Jordan has been able to resume his much praised performance as fictional Jack Kelly, leader of the strike (inspired, in part, by the real-life one-eyed Kid Blink), and he’s as impressive here as he was playing another tough outcast, Clyde Barrow.

His cocky and appealing presence is a definite plus, and he’s surrounded by a gang of Bowery Boy-type cronies who are currently delivering some of the most athletic dancing on Broadway, leaping through the air, and executing a dizzying number of somersaults, handstands, and cartwheels..

The other principals are fine, too. There’s Andrew Keenan-Bolger as Jack’s endearing crippled sidekick, Ben Fankhauser is Davey, not orphaned like most of the others but having to sell papers because his non-union protected father has been injured on the job. He becomes Jack’s loyal ally, There’s Lewis Grosso (at my performance) as Davey’s savvy, feisty kid brother, and pretty Kara Lindsay is the girl reporter who, as you might expect, falls for Jack. John Dossett is Pulitzer, the standard issue villain of the piece.

Harvey Fierstein has written the book (which differs in several key respects from the plot of the movie). That storyline – predictable as it is – holds your interest, though the dialogue and its delivery are often blithely anachronistic. The show tries to capture some of the revolutionary spirit of “Les Miserables” and, in the newsboys, the ragamuffin orphans of “Oliver!” but “Newsies” falls short of both of those.

For me, the big disappointment is Alan Menken’s hard-driving, ultimately wearying score which, on first hearing anyway, lacks distinction and variety, unlike his concurrent “Sister Act” which is so much better. There’s certainly little sense of period in these strictly generic anthems. Some bouncy ragtime-flavored tunes would have been far superior to the bland pop sounds blaring forth here.

The songs are belted out relentlessly, Ken Travis’ sound design pitched much too high presumably to ramp up the excitement.

Tobin Ost’s three-level erector set playing area allows for some striking stage pictures every now and then, and Jess Goldstein’s costumes supply the period flavor lacking elsewhere. Jeff Calhoun has directed at a no-nonsense pace, but he and star Jordan fared better with the much more interesting – and artistically admirable – “Bonnie and Clyde.” And, as indicated, Christopher Gatelli’s high-flying choreography is a big plus.

All in all, I found the hard-sell rather dispiriting. Not so the screaming young fans in the audience who relished every moment, and jammed the stage door afterwards. Still, they could do worse, and they’re getting a passably good history lesson with this one, too.